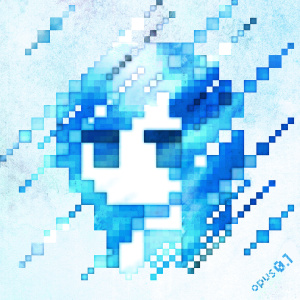 The point has been reached where 8-bit bloops and bleeps popping up in music aren’t a novelty, but an honest-to-goodness source of nostalgia for many young adults, who grew up with Nintendo and Sega as close friends. Those sounds were among the first a lot of artists today probably heard, so it seems somewhat natural for them to pop up frequently in music. And those cartridge-contained noises also carry a lot of emotional weight, so bringing them up is a chance to hit on certain feelings.

Japan’s Kyoheifujita has been doing something like that for a bit now — he’s released music through a few netlables, but for his new album Opus0.1 he’s distributing it straight from Bandcamp. And the bulk of it is built around 8-bit building blocks, yet rarely do they freak out and create fizzy caffeine-drenched numbers. Rather, Kyoheifujita arranges them into slower numbers packed with melancholy, some tracks here resembling nursery rhymes while others take on more mournful shapes, the sort of thing that is an orchestra away from being in a Ghibli film yet still carries an emotional punch in video-game-derived form. Moments of loud noise and natural recordings puncture this atmosphere, adding dashes of tension and glimpses of the outside world respectively, yet every song here is, at its core, built around 8-bit sounds. And squeezes a lot of emotion out of them. Get it here, or listen below.