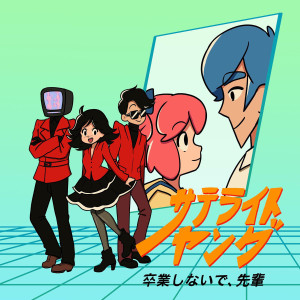 Ahhh, the 1980s…you hear about ’em? Plenty of Japanese artists have, and try their darndest to imitate them the best they can, to mixed results. Given the ongoing push behind “new city pop” and a sure to never set interest in neon-soaked keyboard lines, 2016 is sure to be chocked full of this stuff (along with the inevitable ’90s revival, but one wave at a time). Two songs released recently offer a blueprint of sorts on how to do this throwback sound well without sounding like…well, something that just makes me want to listen to actual music from the ’80s. Throwback J-pop project Satellite Young has been doing a stellar job at it by going all in on the emotional side of the sound, with this week’s “Don’t Graduate Senpai” amping up the teenage melodrama. It works among all the twinkles, and makes for an achingly sweet song with one heck of a fizzy chorus. Get it here, or listen below.

Producer Kosmo Kat, meanwhile, has taken the synthesized sounds of Bubble Era Japan and been playing around with them in a way where even though that decade comes to mind, it still manages to sound more contemporary (or at the very least more netlabel-y) than most. For “”Ucyujin,” he’s working with singer Rei Kuromiya (part of the pop project Trillionstarlights…I will now cop to not being totally clear if this actually is part of that deal, or something separate) and her singing adds a similar youthfulness to Kat’s longing twinkles, one that crams a lot of drama into just over four minutes. Listen below.