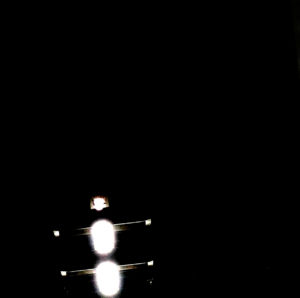 Now in its sixth year, the Atomic Bomb Compilation continues to be one of the best collections of political music and juke going in Japan (and, really, globally). Let’s tackle the first element. For the first time in a few years, nuclear weapons and energy aren’t at the forefront of the summer news cycle. Yay? But that only underlines the importance of the comp’s message. Chiho Oka’s “Kyrie” lays out a lesson in nuclear war and post-WWII conflict, set over a skittering beat that turns the history lesson into something far more unnerving. lits’ “Proliferation” is less explicit, but the sparse backdrop leading to rapid handclaps creates unease reflective of the title, while VMO’s contribution opts for overwhelming noise to get the point across. Elsewhere, Calgames samples a New Zealand rap number penned in response to nuclear testing back in the ’90s, while bahnhof​:​:​zoo uses a quick vocal samples set over a downcast jazz beat to create a sense of sadness on “Just Lit Up.”

The message remains vital, but it’s also important to remember how this compilation has always highlighted so much great juke, initially from within Japan but more recently from all around the globe (just see those last two artists mentioned above!). Atomic Bomb Compilation has long leaned on the darker and more aggressive side given the subject matter at its core, but I’m surprised this year how it’s the more lithe and downright hopeful cuts that have stuck with me during initial listens. Gnyonpix’s “Atom” isn’t upbeat per se, but the way it zips along on scatterbrained electronics and keyboard dollops adds some lightness to it. Loop Ensemble Of Monkey Temple finds a balance between remembrance and hope on “Releasing The Dove,” and Morinobear’s “Atomic Flower” slows the tempo down for a reflective number that you’d mistake for coming from some IDM compilation for social awareness, if such a thing existed. And of course, organizer CRZKNY delivers a gem, with an understated closing number taking time to remember, observe contemporary times and keep one eye on the future. Get it here, or listen below.