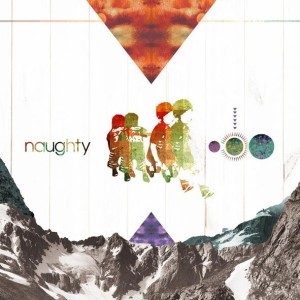 We got to get Bandcamp to have a wider selection of tags, because Fukuoka producer Shigge tagged his new album as “hip hop,” “instrumental” and “beats.” Those aren’t inherently bad things…most of the time, they are amazing!…it’s just that the Japanese music scene has become so over-saturated by these beat albums that I’ve gotten into a habit of skipping over them because I can predict how they’ll go – some dude trying to be Dilla, and unless it comes from the INNIT/Day Tripper/Perfect Touch circle of music, I’m probably OK moving on.

But Shigge’s Naughty…this is so, so much more than a typical beat tape. This is a detailed, entrancing work, the sort of album that comes out of nowhere and floors you. It manages to be both hyperactive – it’s loaded with chopped-up, pitch-shifted vocals hiccuping out over manic beats and – while also being meditative. The opening track on Naughty is the wonderful “Come Into Yourself,” a spacious song featuring vocal samples drowning in vocal effects and a general twinkling-ness that brings to mind a Legend Of Zelda soundtrack. Shigge’s interest in sounds…of not just making a beat, but letting each individual sonic element get a chance to stand out…is what really elevates this album. Like how each part of “Sada” manages to stand out, from the the lonely synth to the shouts of “I love you.” It’s both manic and relaxed, as is album highlight “Abide By It,” which turns sliced-up voices into something deeply lonely…with the whole song still being danceable. I don’t know what I’d tag this, and that’s part of its charm. Listen below, or get it here.