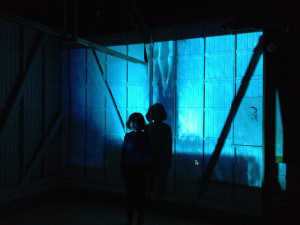 Japan’s indie-pop scene never goes out of style — as long as their are teens who stumble across any Sarah Records release or digs into what artists their favorite Japanese acts listen to, people will keep flocking to the style. It is always possible to find a way into the indie-pop sphere…but it’s also easy to get lost in the shuffle. Aomori City’s The Earth Earth released a couple of albums on Dead Funny Records, and appeared on that label’s very first compilation (geez, this one has aged really well…remember Fancy Books?). After that, not much. Again, it’s easy to get lost in the shuffle…especially if you exist in an area seemingly another world from Tokyo.

The Earth Earth did get up to something recently, though. Last year, they contributed the song “Strange Love, Her Deep River” to a compilation called Puzzle Pieces. Well, that’s what they write on the recent Bandcamp upload…I can’t find anything about it anywhere online. Wherever it comes from, it’s a nice reminder of the woozy wonder The Earth Earth were capable of. “Strange Love” bounces ahead, but turns discombobulating when the guitars blare off and the synths twist around. Listen below.