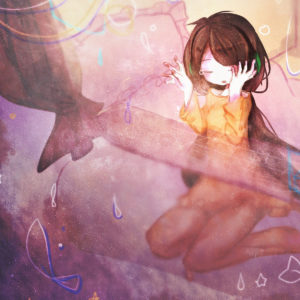 Omoide Label has become one of the best digital spots in Japan to find interesting utilization of Vocaloid and UTAU technology in electronic music. Goto Nao’s SleepSleep EP only adds to this growing reputation. The producer turns to UTAU program Kakoi Nizimine to provide singing on these three songs. The program’s voice isn’t particularly experimental on its own, and Nao doesn’t push it — compared to mus.hiba’s embrace of whispery software — but Nao surrounds the computer-generated lines with an electronic glow that brings out the emotion at its core. Opener “AM2:30” follows the most predictable path, the song opening with rain samples and soft keyboard notes, but building up to a drop that’s part Marshmello, part Porter Robinson. Thing is, the parts where the voice meets the music stand as SleepSleep’s most interesting moments. And that’s on full display on the next two cuts, which avoid predictable formula in favor of solid songcraft (like how the second track here lets the voice collide with the little digital fidgets interrupting it). Get it here, or listen below.

← New House Of Tapes: “Not Eternity” And “There is No Encore”
New Satellite Young: “Modern Romance” →