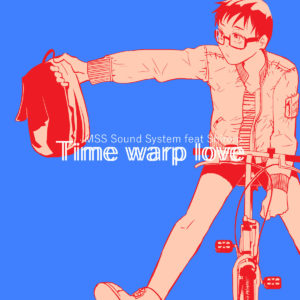 It’s tough to make music that manages to be emotionally evocative and barrier pushing, but producer MSS Sound System and Shiroro pull it off on Time Warp Love, one of the year’s best collaborations to date and a sorta-outta-nowhere contender for best Japanese album of 2018. MSS Sound System has been making music for a while now, most active in Japan’s Vocaloid community. Last year, they shared Secret, which revolved around the digi-voice of UTAU Yufu Sekka. While that one has some sterling moments — see the strobed-out “Emotion Blue — it’s ultimately more interesting than anything else, lacking something a lot of Vocaloid music does (not helped by the fact that same voice has been deployed much better this decade).

Time Warp Love stands as a big jump forward because of the presence of Shiroro, who adds a human warmth to MSS Sound System’s music. That’s immediate from the jump, with Shiroro’s voice adding a sweetness to the hazy-day dream of opener “Walk,” her singing moving from syllable smoke rings to fully formed words creeping into frame. She meshes well with MSS Sound System’s music itself, whether on the melancholic synth bounce of “Satellite” or on “While my footwork gently weeps,” a juke number that manages to work in a swift pop vocal without feeling like a novelty combo (you got Chicago dance music in my J-pop!). Most clearly, she elevates the bleepy number “Milky Way” to a much higher place than where it was when emerging on Secret last year (though, to their credit MSS Sound System tweaks the music so it is a little less 8-bit and more delirious). MSS Sound System has always dabbled in a variety of styles, and Time Warp Love goes all over the place, but Shiroro serves as a constant, and the team create an always-compelling bit of electro-pop. Get it here, or listen below.