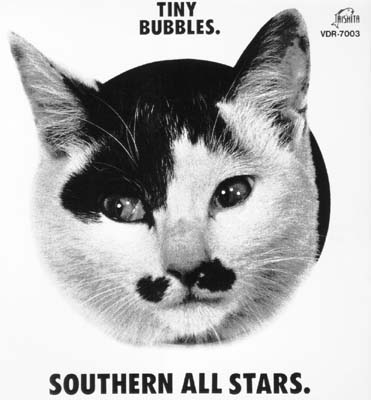 One day, on a whim, I decided to clean out my cluttered closet for the first time in over a year. While sifting through old school supplies and broken fans, I found a stack of 60-some old vinyl records hidden underneath an old futon. Mostly featuring albums dating from the 70’s and early 80’s, this pile featured classic albums by The Ramones, Bruce Springsteen and virtually every album Status Quo ever recorded. It also boasted a lot of Japanese artists, ranging from ones I’d heard of to LPs that appeared total casualties of time. With a recently purchased turntable in my possession, I decided to listen to as many as these records as I could, famous and forgotten alike.

In this new infrequent feature, I’ll write about older Japanese albums I’ve come across whether through finding them lodged underneath my bed, on sale for 100 Yen at a local swap meet or discarded in the forest (this actually just happened to me). The first installment will focus on an album that turned a group of J-Pop rising stars into a household name for three decade, Southern All Stars Tiny Bubbles.

Tiny Bubbles captures Southern All Stars at the moment right before they became one of the most famed and influential Japanese acts ever. Despite a few brushes with chart-topping success a few years before this 1980 LP, this album marked the beginning of one of the most stunning success stories the country has ever seen. Tiny Bubbles went straight to the top of the Oricon…as did 15 subsequent full-lengths. They’ve had more than 40 singles land on the top-selling list and haven’t relented in three decades. HMV named them the most influential Japanese act ever. It’s a monster of a resume, and it was this album that marked the beginning of a dynasty.

Which is kind of surprising considering just how weird Southern All Stars sound on their third album. As the cat-centric art indicates, this six-piece weren’t afraid to indulge in a joke or two to the point of actually being labeled a “novelty act” earlier in their career (there decision to do interviews dressed in ridiculous costumes didn’t help to deflect this claim). Tiny Bubbles may not be a crazy piece of experimental art, but SAS jump from balladry to reggae-tinged to outright Broadway musical. It can be a confusing listen, and that’s coming from the year 2010 when this sort of genre ho-scotch should feel way less weird. It wouldn’t be shocking to see such an all-over the place album top the charts or even result in the band responsible having a respectable career. Transforming them into maybe the greatest J-Pop group ever, though, is a surprise.

The key is that, for all the costume changes, Southern All Stars sound consistently good the entire time. It’s the secret to Tiny Bubbles’ and the group’s continued success, the ability to push J-Pop into stranger places all while sounding completely normal. Take the second track here, SAS take on 70s R&B. Despite cheesy keyboards and baffling lyrics about a “tobacco road sexy virgin” (which might only shock an English speaker, it likely left Japanese listeners unfazed. Clunky pop English still sneaks into songs today), the band manages to keep everything catchy thanks to a laid-back pace and lovely female backup singing. Lead-off track “ふたりだけのパーティ” imitates Billy Joel but never comes off like a Piano Man rip-off, while “恋するマンスリーデイ” attempts reggae. On the latter, SAS avoid falling for the trap countless J-Poppers after stumbled into…if you are only dipping your toes into the style, don’t try to make a reggae song but rather a J-Pop interpretation of a reggae song.

Though the band also takes some side roads into the outright strange. Compared to the rest of the album’s chilled-out tone, the Broadway glitz of “Hey! Ryudo!” completely jars especially on repeat listens. It’s an honest-to-goodness stab at musical theater, complete with ragtime horns and a tap dancing interlude (seriously). Imagine someone trying to turn Frank Sinatra’s life into a musical, and Japan tried to create a version of it as well. This song would be prominently featured on the soundtrack. Less record-scratch inducing but weird all the same is the two takes on the title track, a Nashville-meets-Hawaii number that one ups Don Ho.

Not to imply Tiny Bubbles is just six goofballs playing around with genre. For all the side roads, Southern All Stars staying power comes from solid pop songwriting ability and it’s on full display here. The lead track, in all its Joel-ness, is the most thunderous track here and shows SAS could flex some muscle when they wanted. “私はピアノ” finds lone-female member Yuko Hara tackling a hybrid bossa-disco pop standard and her excellent voice conquers the song. Later in 1980, Mizue Takada covered the song and made it a smash. The LP’s absolute highlight though ends up being late cut “C調言葉に御用心.” Opening with a rising guitar line not far removed from something Bruce Springsteen might have tinkered with during the time, SAS bring in simple piano, percussion and strings to create a dreamy bed of a song. Keisuke Kuwata’s vocals…more on those in a second…work wonders on this relatively sedate track, his sweetest performance on the album. Mostly though, it’s the guitars which add a note of triumph to the whole affair.

The most critical element of SAS introduced to a larger audience on Tiny Bubbles is Kuwata’s singing style. It’s a throaty, twisty thing capable of drawing out lyrics and also shooting them out at rapid-fire, like a burned out lounge singer who tries pop. The scattered ballads on this LP would be boring if sung by anyone else…hell, the one delivered by Hiroshi Matsuda is boring…but in Kuwata’s hands they become fascinating feats of vocal gymnastics. It’s both the most unorthodox part of Southern All Stars but also the part responsible for them truly standing out. Kuwata shines on Tiny Bubbles.

Southern All Stars climbed even higher in the decades to come, but that journey started here. Tiny Bubbles is a strange, catchy album that probably showed a lot of future J-Pop stars not to be afraid of trying out far-flung styles. It’s a weird one, but also the perfect showcase of all the little oddities that turned SAS into what they are today.

email
← Controlled Karaoke: Former AKB48 Member Rina Nakanishi Becomes AV Idol
Let’s Put Off The Start Of The Week By Looking At A Trailer For A New Boredoms DVD →