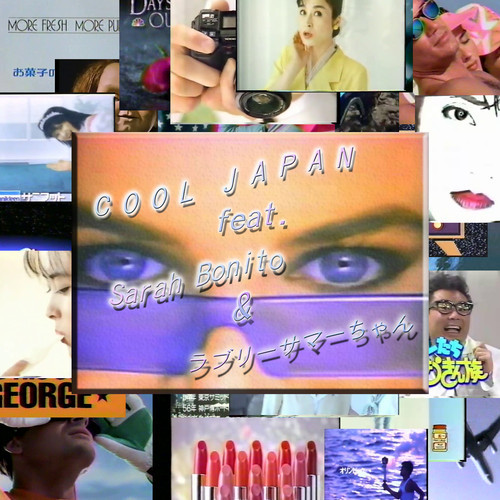 I have no idea who Cool Japan is, even though I THINK I know who it is (rhymes with “mofu wheats”), but that’s just a sinking suspicion with no real proof. Damn you journalistic conscience. Whoever Cool Japan is, they’ve released a fair amount of material…the bulk of it being vaporwave, the outfit itself cheering on the idea of plunderphonics, taking sounds from other sources and bending it how you want. New song “Rush Hour” is a slight departure from all the slowed down, yanking-from-commercials tracks appearing on previous Cool Japan full lengths…it still sounds like the bulk of the music is built around a sampled loop (with some various other sounds sprinkled about), but it isn’t vapored down, but left to move at a pretty fast tempo. Also, there are guest singers – Sarah Bonito from Kero Kero Bonito in England and (what makes it firmly eligible for this blog) Lovely Summer Chan.

And thank goodness for that, because “Rush Hour” is an absolute blast. The music is a horn-led, never-stopping whirl that matches the track’s entire fast-moving-city vibe…only taking a breather for a mid-song interlude featuring some sampled dialogue. It is foot-moving stuff, even without the guest singer’s parts, but those additions add more character to the song. Sarah Bonito jumps between Japanese and English to sing about city life, somewhere between a portrait of fast-moving life and a bit of dullness (shouts out to Starbucks, Burger King, cola, the train, among others). It is a bouncy treat, whoever put it together. Listen below.