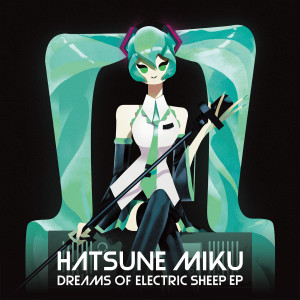 Sapporo is, technically, the birthplace of Hatsune Miku, the avatar for singing-synthesizer software Vocaloid. Fittingly, the Hatsune Miku Dreams Of Electric Sheep EP gathers electronic artists from Hokkaido’s hub to create songs using the technology. It’s also one of the more interesting Vocaloid releases in the program’s history….a lot of artists using Vocaloid tend to treat Miku like an actual person. That’s great for her, but it also results in very little experimentation with what is, when you get down to it, an instrument — people just use Vocaloid to construct rock songs and ballads that sound like the rock songs and ballads clogging the Japanese mainstream. Given this weird new tool, a lot of people create the same thing, but with a little bit of a digital trail coming off the vocals.

Electric Sheep highlights five artists actually seeing what they can do with Miku’s voice. Two of the more experimental tracks come from familiar faces — Parkgolf’s “Log In” is the sort of sliced-up mania he is so good at making, while Qrion creates a moody shuffler featuring one of the more unique tunings of Miku’s voice I’ve ever heard. They offer up the most radical Vocaloid tracks here, but the remaining three play around too. Callasolled’s slow-burning contribution is absorbing, while the slow-moving “Gloamin” finds O.N.O. playing around the character’s voice over a murky backdrop. Get it here, or listen below.