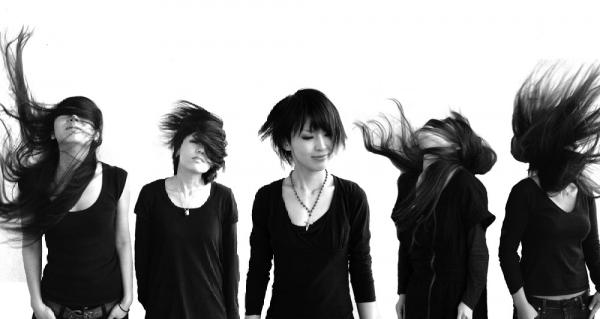 Fall a little behind on your blog reading and, yeesh, you find yourself totally out of the loop. Both JPOP Lover and personal-recent-discovery Neaux Clicked On It (it’s good, read it) recently big-upped JinnyOops! I think two makes a trend, especially in the tiny universe of Japanese music blogging.

This Osaka five-piece plays a punk-tinged rock (flirting with chugga-chugga metal on occasions) emphasizing speed and…horns. JinnyOops’! big musical twist is they bring a horn section to the table. It’s a risky move – simply throwing an instrument not typically utilized by similar groups alone doesn’t improve a song. If anything, it has a far greater chance to make one think “hey, these weird sounds are only here because the song alone is pretty derivative.” Which a few of this group’s MySpace featured tracks (only samples save for one) hint at. Yet a fair share of songs avoid gimmick-ska territory and actually sound pretty cool. The shout-along “HEY YOU” never overdoes it, and “No More Candy” sees the horns stab through the grinding guitars to offer a little bit of bubbly joy to the affair. “Time passese” and “MINX” get points for the slightly distorted vocal treatment reminiscent of Mika Miko (R.I.P.). The really surprise, though, comes when the group dials the head-thrashing back a bit. “生心生歌” shines because of how downtrodden the horns sound, helping to add some real emotion to what could have been the band’s “serious feeling song seriously.”

JinnyOops! have a mini-albu called Eat Your Brain out now. For all you American readers, you actually have a chance to see this band, as they will play the States in March as part of the Japan Nite tour.