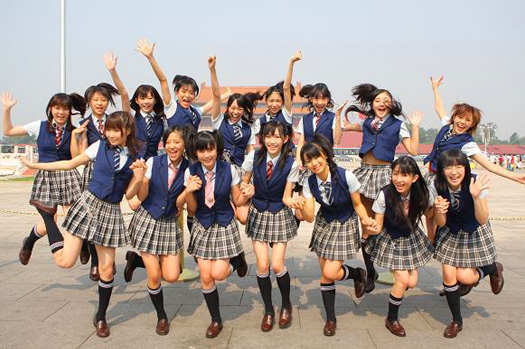 I’m not ready to write up some grand thesis on the matter, but I believe one of the biggest differences between American and Japanese pop is the degree to which their audiences go along with the star’s images. In the U.S. message boards chirp with discussions about the politics of Lady GaGa and don’t question the fact Jay-Z digs Grizzly Bear (a week before his new album comes out). The Japanese don’t seem to dwell on these types of topics – they approach pop as strictly entertainment (again, based on what I’ve seen and read, please prove me wrong). My grand idea – the Japanese pop consumer seems more inclined to view the music as part of a product while their American counterpart seems more inclined to try to look past the PR departments work.

Case in point: something like AKB48 would never work in America. This group, produced by Yasushi Akimoto, boasts a slightly less than advertised 42 idols. The singers are split into “teams” – teams “A,” “K” and “B” – for easier performances. AKB48 have their own theater in the Akihabara district of Tokyo where they stage performances every single night. Two shows on Saturdays and Sundays. Outside of Vegas or Jimmy Fallon’s talk show, this idea wouldn’t fly in the States. Oh, did I mention they even have “team research students” that I guess acts as a sort of idol farm system? That puts the number of members well above 48.

AKB48 not only frequently appears in school girl outfits but they also have been transformed into anime characters, two usual dealbreakers for me. But this massive group is on a big upswing at the moment, so ignoring them would be stupid. They performed at New York’s Webster Hall earlier this year and recently released a new single that’s the top song according to this chart and the third ranking song according to Music Station. Here’s the hot single, “River.”

The song itself is pretty terrible (and the less said about the video, the better). The chanting and mini-Stomp routine at the beginning do an excellent job of firing a flare warning of crap before settling into a rather generic J-Pop skin. Except for the occasional outbursts of chanting – just very annoying and out of place. “River” gets credit for having a kinda cheesy beat going before the verses start, those sound pretty neat. But after that…nothing much special going on here.

Yet trying to critically assess this single proves futile (though that won’t stop me!), because AKB48 exist primarily as a live entity. They have 40 some odd girls dancing around on a stage every night – that’s the proper time to see this group, and this song outside of that arena doesn’t showcase anything that makes AKB48 an interesting musical endeavor unique to Japan.

← The Insect Kids
THE DIM →