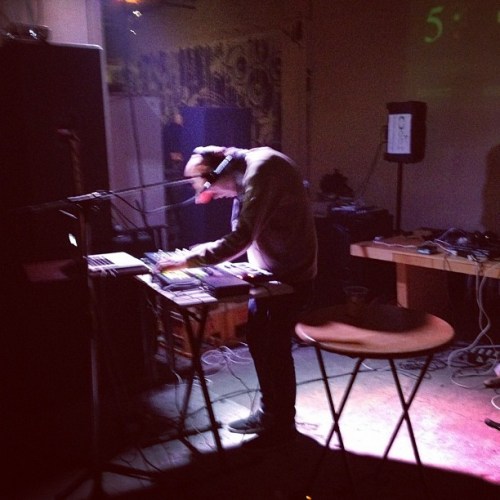 Erik Luebs, who records as Magical Mistakes, has been busy as of late. He toured America this past summer, released a new full-length album called Everything Uncertain on Day Tripper records and he helps put on the electronic-music event INNIT in Osaka. This Saturday, Luebs will appear on the same bill as English producers Clark and Lapalux, plus American producer Traxman, at Osaka’s Namba Hatch. We talked to the Shiga-based producer about his new album, working with violinist Jake Falby and his recording process.

MBM: You did a tour of the United States this past summer. How did that go?

Erik Luebs: It was really good, I had a good time. I played 11 dates in total. I had really good shows in Los Angeles, where I played at The Smell, and San Diego. San Diego, in particular, was oriented towards the same sort of stuff that’s going on in Osaka. The people who presented that show were actually collaborators I’ve worked with before. They worked with us on the INNIT magazine and they did a remix for me. They have a crew there called Kill Quanti, they put on a lot of cool events. They are really open-minded people and they were interested in what I was doing. I felt very at home with that crew. Matthewdavid played as well, he has kind of become a good friend of mine as of lately.

He also played at the Los Angeles show. The Smell was a place I used to go to a lot when I was younger, and I was more into DIY and noise and punk music at that time. It was kind of weird to go back there now, now that I’m doing my own thing that is different than what would traditionally characterize that venue. I think it is a very open-minded space, and people were receptive. I also saw a lot of friends I hadn’t seen in a really long time, they came out.

MBM: How did you meet up with Matthewdavid initially?

EL: We ran into each other at a show for a musician I was putting on a tour in the United States for, a Japanese guitarist named Yoshitake Expe. That was three years ago. At the time, Matthewdavid was just playing support on the bill. We kept in touch, just occasional e-mails back and forth over the last two years or so. Seiho encouraged me to reach out to him to do mastering for the album Everything Uncertain. That was around early June when we reached out to him. I didn’t think he would have time to do it, but he was very interested in it . He also contributed a remix.

EL: Some of the first songs started coming about after I finished a small, self-released EP I put out last winter, called Special Friends. That was more of a collaborative effort of me trying to develop and define my own unique sound amongst other creative minds. For this new album, I was less trying to go through hip-hop beats and beatmusic. I don’t know whether it was intentional or it just happened, but I’ve always been drawn to things like post-rock and pop music as well. Like, the song “Don’t Need Much” is pretty poppy.

MBM: Where was the album recorded?

EL: About 60, 70 percent of it came together while I was up in the mountains [of Miyazaki]. Almost all of the editing and mixing and getting really deep into that happened here in Shiga. The majority of it was finished prior to moving out here, but it wasn’t perfect. And I spent quite a bit of time working on little minute details. That was quite a process.

MBM: How did being in Miyazaki affect the recording of the album?

EL: I would say the Special Friends EP was more specifically really deep with the philosophical state I was in at the time being in the middle of the forest and nature. This newest record was more of a culmination of a lot of things I’ve been up to musically. It’s more of a well-rounded statement of other places I’ve been as well, not just one specific headspace. I think that first EP is quite a bit slower, it is a bit more meditative, it’s more focused on one overall philosophical idea. This new one, being an album and not an EP, I feel like if you are going to do 40 minutes of material or so, it might be nice to try to see how many places you can go.

This one wasn’t affected by any philosophical idea, like being up in the mountains or anything. One of the songs, the last one, originally started three or four years ago. I stumbled upon it and I said “Oh, shit, I made that!” I made it sound a lot better.

MBM: Everything Uncertain features samples of what sounds like Japanese announcements and, on the song “Metemorphosis,” a sample talking about caterpillars. Why did you choose the samples you did on the album?

EL: The announcements were recorded from a daily broadcast box in the village I used to live in, and a woman would broadcast things three times a day, announcements. It was mostly about emergency broadcasts, so like if there was a landslide. I just recorded her speaking and I thought it was interesting. I’m not particularly interested in what she was saying – I think she was mostly talking about really mundane things. I think the stuff I had in there was mostly about looking out for your health. It was more about the mood, of having this voice and juxtaposing it with melancholy chords and melodies. A lot of bands I liked growing up did that a lot. I just really like the way you can change and affect how you feel about something, and then you add this voice and suddenly it takes on this extra meaning. It might be completely irrelevant, but it still resonates with you somehow. I like having voices in there.

The other sample…that might have more of a didactic meaning of some sort. The voice on the sample is talking about when a caterpillar becomes a butterfly, literally all of the cells dissolve into one sac of fluid. It kind of brings up a lot of questions about consciousness, like do we even identify as an organism. I think that’s an interesting idea – I wouldn’t say that’s an overarching philosophy of mine in particular.

I don’t really sample anything else. Aside from some 808 bass drums, I try to put together all the sound myself.

MBM: What is your personal relationship with nature?

EL: With my music, I try to create a canvas on which the actual music takes place on. For me, that canvas is trying to occupy a physical space that we can hear, feel, touch and see. The palette that I chose was organic sounds – plants and paper. Sounds of my room as well. Water. Actually, the entire “With Love” song is a shochu box , I just recorded percussion off of that. I wouldn’t say I was particularly stringent – I didn’t have a whole lot of rules.

MBM: How did you connect with violinist Jake Falby?

EL: We went to college together, at Pitzer College. We didn’t meet specifically as music buddies, but we did begin to work on music together. He’s a really good violinist. We ended up living in New York together for a little while, and we played music in New York too. I asked him if he would be down to arrange some strings, and he was able to. And it worked out really well. He also played on nine of the eleven American bills…he missed the West coast shows, but he played the rest.

MBM: You’ve mentioned that you were a fan of psychedelic music, and you come from a psychedelic and shoegaze background. How did you incorporate those influences into the new album?

EL: Inevitably, those influences come out of the music that I’m making because that occupied a very long portion of my creative life. And I’m still into it. But now, I’m more or less involved with the electronic music community. And I think that community is in a sort of renaissance where you kind of do what you want to do, without a whole lot of rules. I’m sure it has always been more or less like that, but nowadays there are more people who are more successfully touring the world and playing music that’s really their own thing. I don’t want to say it too much, but like Flying Lotus or anyone coming off of the Brainfeeder label are like no rules, do what you want. And people are digging it.

With me, I’m coming from a range of influences. It isn’t deliberate, but the way my creative voice is coming out is mixing a lot of things together. I definitely love bass, and I try to get things pretty bassy, but I like the wall of sound and I like dynamics and I like post-rock music so I try to get that in there. And most recently it would be this more soulful jazz thing.