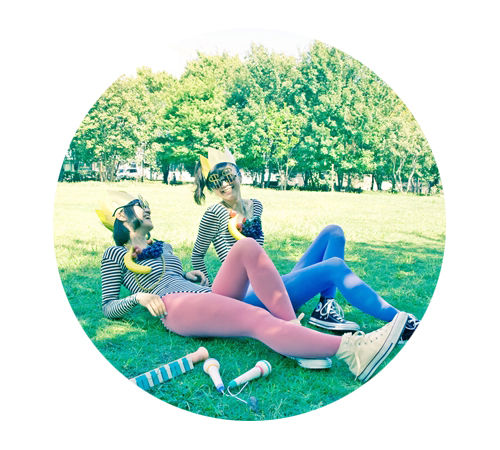 L.A.H, the self-titled debut album from Tokyo twee-crunk duo Love And Hates, comes out in early December, but you can hear four tracks from HNC and Moe’s (Miila And The Geeks) rappy project now. The concept behind Love And Hates might seem offsetting at first – rap music done by two Japanese women fond of the slide whistle and candy – but the entire act rises above the usual toilet-bowl quality joke rap because HNC and Moe aren’t having a laugh at hip-hop. No white dudes sporting guitars or dipshit irony flowing out from LA dipsticks. Love And Hates take rap and pretty much just have fun with the genre instead of making the same jokes rock bands have been making for 25 years. On the preview tracks, the duo embrace a party-starting attitude that leans heavily on shoutable choruses sprinkled with goofy touches, as on the album’s title track which swerves into “London Bridge” at various points. The closest Love And Hates come to approaching a “can’t spell crap without rap” bumper sticker is on “Money,” which finds them spitting about wanting lots of money, boys, candy and more money. Though it can be a little eye rolling at times, the duo don’t seem smug about it and mostly exude fun – and the production sounds good, which helps covers up the weak parts.

Best part, though, seems to be that Love And Hates convinced Hideki Kaji to guest on the song “Mahna Mahna” as the role of the bearded nonsense-mumbler from The Muppet Show sketch. That’s a grab if I’ve ever seen one. Listen to the tracks here.