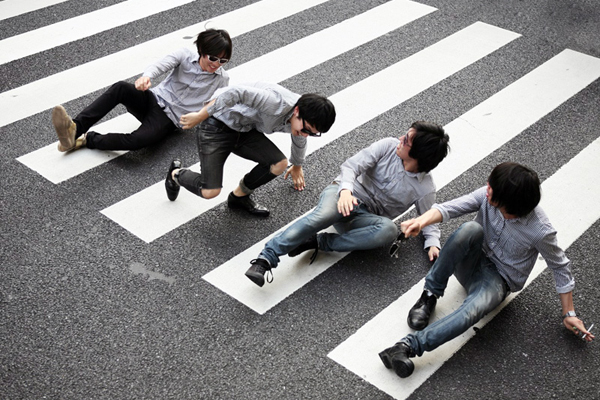 After a few months of forcing one of my friends to travel all the way out to Osaka to do various activities…which, all tended to end in playing Angry Birds…I decided to save him (some) train fare and visit Nagoya for one Saturday night. Having avoided Aichi’s biggest city for a while now, my night out in Nagoya reminded me of what a strange place it was. Osaka…and Kyoto and Nara and Tokyo and anywhere in the world really…isn’t a shining example of human transcendence, but Nagoya seemed particularly dodgy, at least on this November night. We witnessed a man urinating almost proudly along a busy street, his back turned but with no pause as groups of people strolled by. We might have seen a drug deal. Whereas the street stalkers in Osaka play it cool and ask if you’d like a “massage,” the ones in Nagoya practically sprinted up to us to inquire if “you want some sex?” We played a lot of Angry Birds.

Thankfully, this trip centered around a show by three of Tokyo’s most interesting acts at the moment – The Brixton Academy, Canopies And Drapes, and CUZ ME PAIN’s Faron Square. The trio of artists played at Nagoya’s Tight Rope, a place that seemed to fit in well with the general air of Nagoya strangeness. Tight Rope rested on the third floor of a building, sandwiched between a soul bar and a hip-hop club. This placement led to a lot of people peeking into Tight Rope, hearing Toro Y Moi instead of Rick Ross and immediately darting upstairs. Yet once inside, Tight Rope proved a nice venue – a bit narrow, but great sound and a generally good vibe.

Faron Square started, playing what was according to their Twitter account their first band show in a year. The rust sometimes showed, as they experienced a few false starts, but overall the four-piece sounded OK. Faron Square stand out on the CUZ ME PAIN roster quite a bit, and their Tight Rope set reinforced that idea – though they still boast the slightly ghostly glow defining the rest of the roster’s music, Faron Square are the most “pop” act on that bedroom-centric label. The group’s song are less concerned about making you look over your shoulder and more about getting you to dance, at least a little. The keyboard-focused tracks even approach something like bizarro-world yacht rock (this is a compliment, I swear), the music sounding smooth but taking on a stranger bent than “What A Fool Believes.” Considering the individual members of the band make more CUZ ME PAIN-ish tracks on their own, Faron Square serve as a nice splash of variety for the still-young label. Live, the groups vocals sounded a bit too high-pitched, the masking they get on record not present, thrown naked in front of everyone. Faron Square ultimately seem like the type of group better heard at home, though downtime between performances could have been a factor.

Canopies And Drapes played a short set next, running through the entirety of her lovely debut EP. Violet, Lilly, Rose, Daisy was the product of just one person, but for the Tight Rope show CaD’s Chick called upon members of The Brixton Academy to help her bring what are self-contained dreams to life live. This full-band approach resulted in all four songs taking new shapes, the characters from one’s dreams materializing in real life but as, like, dogs or something. Set opener “Stars In Bloom” became an eyes-on-the-floor shoegaze number, while “Perfect Step” was blessed with an extra snap in its back, turning into a legit leg shuffler. One of the EP’s biggest highlights, “Living In The Snowglobe,” suffered from these live additions, that track shining as an example of Canopies And Drapes lyrical smarts, blotted out a bit live. The other EP highlight “Sleeping Under The Bed,” though, killed it. The twinkling frostiness of the recorded version was swapped out in favor of…gasp!…funkiness. It was stupidly danceable, blessed with an energy that made it one of the night’s biggest highlights.

Headliners The Brixton Academy provided plenty of highlights as well. I had been told TBA sounded even better live than they did on record, and the show at Tight Rope confirmed that. Prior to this Nagoya trip, TBA’s appeal could be boiled down to two major points:

1. Their songs exude emotional sincerity.
2. They are fun to dance to.

Live, point one fades into the deep background because point two consumes everything else. To put it crudely, the crowd at Tight Rope went batshit for everything the band played. Even something like “Two Shadows United,” which unfolds at a pace better reserved for bedroom dancing, had people nearly moshing. A plentiful amount of alcohol consumed by their 3 A.M. start helped…and TBA helped by popping open a bottle of champagne, passing it into the audience so we could all suckle on it…but really the music made it all come naturally out. The songs from Vivid predictably killed it oh so hard – the delirious “In My Arms,” and ending everything with an encore of “So Shy” you can imagine how that one went (great) – but more surprising were how good tunes from this year’s Bright As Diamonds sounded. “Neons Bright” and “One Time, One Night” carried extra oomph at this setting, TBA executing them perfectly and working everyone into a tizzy. Best of all was “Youth,” a song that on the album comes off as a good number that wants to be bigger than it actually is. Live though, it sounded capital-H Huge, the guitars blasting out like engine turbines and becoming all consuming. It was a might fine performance.

Yet said live show also revealed another truth – Bright As Diamonds would be one of Japan’s best EPs in 2011 if it weren’t one of the year’s more just-above-average albums. TBA played the first five tracks from Diamonds live, ignoring the slog of a second half. It is a front-loaded LP and even the band seems to know it, avoiding the aimless instrumental numbers and less-thrilling late tracks and instead focusing on the really good opening run. Live the band remains a must-see, but Diamonds is merely OK and was easily bested by Dorian’s Studio Vacation in this year’s race for “best imitation of the 80s by people who probably didn’t live in them very long.”

And so the night ended, crowd inebriated to a giddy level, some choosing to continue pounding shots, others slouching over on Tight Rope’s benches, still others probably wandering upstairs to scream “I THINK I’M BIG MEECH.” My friend and I, an hour away from first train, sat content on the stage, happy with how the night turned out. We closed the night out the only way we knew how – by chucking exploding poultry at green pigs.