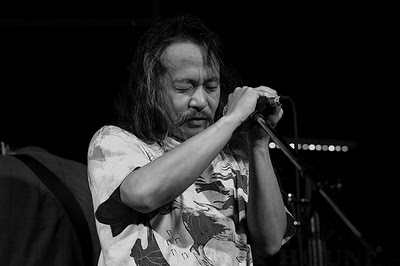 “Far East Electric Psychedelic” at Osaka’s Fandango made good on its title many times over come the end of the night, but let’s start from the beginning anyway. For about two hours, this looked like it was going to be glam-rock-dress-up night, the first two acts opening up the evening wearing all sorts of neon-green suspenders and Bowie-aping face paint. Not to simply brush off these groups, but for a bit this seemed more of a spectacle than anything else. But oh it turned around

Gezan played first, clad in aforementioned suspenders as well as floral-print dresses and similar thrift-boutique wears. Despite the goofy get-ups, Gezan played ear-wreckingly loud hard rock in the mold of a jittery Black Sabbath. Their songs switched tempo rapidly, a decision mimicked by the bands movements as they easily went from honest-to-goodness headbanging (complete with overly long hair whipping forward) to dashing around stage wildly until, climatically, the lead singer took an NBA-ready jump into the crowd. This was Rapturin’ music, unpredictable scorched-Earth squall that oftentimes didn’t sound like proper songs but untethered chaos. The costumes didn’t predict this.

N’Syukugawa Boys offered a slightly softer follow-up, pop ditties cleaning up in the wake of Gezan’s approximation of a cataclysm. Wearing face paint and featuring a member who I can only describe as “space Elvis,” they actually came closer to sounding like the glam rock their duds screamed out as. The music sounded good, but the trio suffered by talking way too much. I’m sure the banter was rich with niceness and witty observations, but when it feels like nearly half your set involves chit-chat, it’s going to get annoying. Credit goes to space Elvis guitarist, who spent maybe eight minutes playing the same notes on loop while the other two members chatted to the audience.

London-based outfit Bo Ningen followed, and they were the main reason I’d come to check this show out. They stood out prominently on the recently released Style Band Tokyo compilation, there take on heavy-punching hard rock being both focused and prone to outbursts of screaming. They managed to find a professional middle ground between the first two acts – they were still loud and wild and shy to talk for very long, but they also fenced the noise into recognizable songs. Bo Ningen were the most focused, mostly avoiding slipping into the wild save for a few extended outros gone acid.

The finale would be an appearance by former Can singer Damo Suzuki, joined by Bo Ningen and N’Syukugawa Boys (except for space Elvis, sadly). I spent a good chunk of the night between sets trying to spot Suzuki, wondering if the relatively clean-cut older Japanese man in the black trenchcoat was him or perhaps the long, grey haird guy in the too-tight-fitting t-shirt. Turned out to be none of them – with the other players on stage, Suzuki seemingly emerged from nowhere, stout in a yellow shirt with frazzled long hair.

The ensuing hour ended up being mesmerizing, but in a way that’s hard to write about beyond the deeply unhelpful “you should have been there!” Suzuki sang unintelligible words seemingly non-stop while the surrounding musicians improvised around his alien shouts, his singing drawing out the best from those around him. Thus, the members of Bo Ningen drifted into deeper psych territory and cut loose, playing wildly and at times with slight violence. The male guitarist from N’Syukugawa Boys, cigarette cooly locked into his mouth, took an empty can of Asahi Super Dry to his strings and generated a wonky sound that prompted him to grin oh-so large. At one point, some guy emerged from the audience to take a guitar from someone from Bo Ningen, playing a few chords before fetching a drum and going tribal on it. After that, Suzuki emerged from his trance and shook hands with as much as the audience as possible. Again, sorry, but you had to be there.

That final, hour-long trance delivered on this event’s title. The other acts were far from objectionable (and for the most part all around good, Bo Ningen in particular sowing some great stuff), but were more psychedelic in regards to image rather than sound for the most part. That final hour, though, elevated the evening and completely fulfilled expectations.