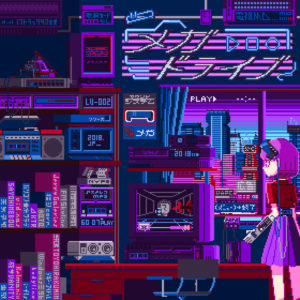 Mega Drive takes a lot of expectations and flips them around. The compilation serves as fledgling label Local Visions’ first release, and gathers artists from Japan and abroad together to dabble primarily in styles that would be seen as niche genre by most — and with arguably the main sounds being touched on across Mega Drive being pretty internet centric. But the jumble of artists here makes for the most interesting perspectives. Vaporwave signifiers appear frequently, and tracks such as Cat System Corp’s “iColluseum YamaDew” (it’s a pun!) opt for the laziest form of that sound, slowing some forgotten Japanese number down and…hit upload. Yet other artists — many actually from Japan — hit on something different, or even strange. Toyohirakumin manages something more dramatic on their contribution, while Pasocom Music Club manage a different kind of exotica on the jaunty synth number “Jogae,” stylized in Hangul and featuring Korean vocal samples. Boogie Idol slows things down on the dusk-ready “Compass Point,” while i-fls conjures up emotional elevator music on “Eventide Blue.” There’s a lot going on here — I could write a post entirely about the album standout courtesy of AOTQ, a breezy slow burner that just makes me want to rent a car and drive along the coast — and offers a nice rounded perspective on a lot of now-familiar ideas. Get it here, or listen below.