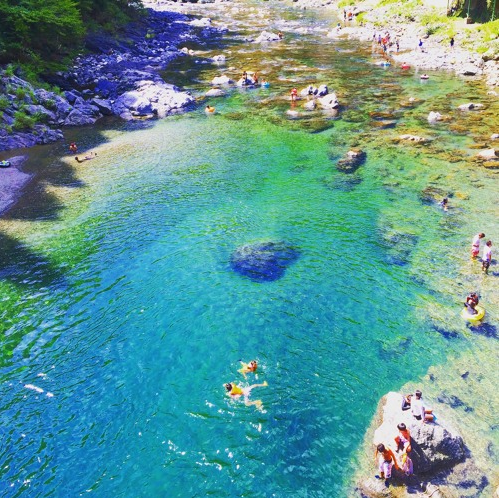 The final MAP for 2015 has arrived and, as winter sets in, we spotlight Osaka’s The Neon City and the warm “Summer Memories.” Listen to it, and more, below!

The winter is just settling in across Japan, but that fact has not stopped Osaka artist Seina Ida from remembering warmer times. Under the name The Neon City, she makes woozy electro-pop with smudged corners, and on Summer Memories she pours in a healthy amount of nostalgia for times gone by. Perfect for those clinging on to the last few rays of warmth before the cold really arrives.

This year marked Zonaindie’s 10th birthday, so for this last MAP of 2015 we wanted to share a track from Rubin y Los Subtitulados’s first album, Esperando El Fin Del Mundo, which was released during our first year as a music blog. Adios, Torino is a beautiful ballad and one of our favorite songs by this great songwriter from Buenos Aires. We recommend all of his discography, which is avaliable on Bandcamp.

AUSTRALIA: Who The Bloody Hell Are They?
Jaala – Salt Shaker

Salt Shaker is the second single from Melbourne art-punk Cosima Jaala’s debut album, Hard Hold. It tracks the troubles Jaala has coming to grips with her upbringing in a far-flung suburb on Brisbane’s coastal fringe. The lyricism of this track is emblematic of the raw earnestness you hear across the entire album, with Jaala seemingly pulling melody out of thin air. The unpredictable spikes and troughs keep you engaged throughout, as if you needed any more reason other than her finely executed vocal gymnastics. The track is a refreshingly honest account of a troubled time that avoids indie tropes and turns complex emotions into a beautiful song.

Como Vês is the opening track of Alice Caymmi’s 2014 album Rainha Dos Raios. Born into a family of famous musicians, Alice is surrounded by some of the most prominent artists in Rio de Janeiro and contributes to Brazilian pop music (known as MPB) with contemporary electronics and experimentation.

Tennyson are the adorably young brother and sister duo Luke and Tess. Creators of playful electronic music, they recently appeared on Ryan Hemsworth’s Secret Songs series and come from the same management camp as Hemsworth and BADBADNOTGOOD. The young people will take over the world.

With influences of pop and no wave, Las Olas have made their presence felt in Chile’s indie scene with a couple of self-released singles and some outstanding, explosive live gigs. They recently launched their first video for Todo El Tiempo Está Ahí (“All the time is there”), which is this month’s MAP song.

Six years of exploring raw sounds, influenced by Delta blues, have led to Los Makenzy becoming one of the most fascinating bands in the country. Their popularity sees them tour a lot outside Colombia. Aura, their first track with Spanish vocals, show us their quieter side.

Three years on from their lauded La Porte debut EP, spousal duo TM Hunter – aka Therese and Michael Fischerson – will release their first full-length ambient alternative pop album, 1.12.5.24, on January 15. First single Villains came out in October with this great video and here’s Gold as a MAP exclusive download.

Featuring members of local bands El Extraño and Vedette, Tonicamo brings us a creative concept that encompasses a gay-friendly music and visual aesthetic. Humor is one of the elements utilised by Tonicamo in their first album, Mario López.

Troü are a four-piece band from Bandung, West Java, who are trying to craft pop music with simple melodies and harmonies as well as beautiful lyrics so the whole world can sing with them.

A dark, conceptual rock band working with soundscapes that fall somewhere between Placebo and Kate Bush, Kingdom Of Crows are a Dublin act on the rise. Debut album The Truth Is The Trip arrived on Halloween, and its heavy yet stripped back sound is making suitably slow-building waves. One for a moody day staring through rain-spattered windows.

This song, if not the entire album, could be the most perfect Music Alliance Pact record ever: electronic, dance, hip hop beats, Latin rhythms, Asia and Africa, Balkans and Far East, all mixed together. Go Dugong has found a way to make global music sound “closer” to everyone, and make it sound essential.

Formed in 1979, The Rifffs were at the forefront of alternative music in Malta. The band managed to capture the imagination of youth culture of the time by performing around the island and securing a record deal with an independent UK record company which culminated in the release of one of the most influential alternative Maltese records of the early 80s, Dance Music For The 80’s Depression. After a 24-year absence, The Rifffs reunited in 2006 and have since brought out two albums and performed numerous concerts in Europe.

Youthless appeared in MAP’s April 2010 edition with a song from their debut EP. The
Lisbon-based American and Brit achieved some popularity, landing opening slots for the likes of Crystal Castles and The Horrors. Youthless are back in early 2016 with an album, This Glorious No Age, and Golden Spoon is the first single from it. You can watch the lyric video here.

Glasgow-based Bossy Love sees Amandah Wilkinson, one-time frontwoman of now-defunct Australian band Operator Please, hook up with Scottish native John Baillie Jnr, the former Dananananaykroyd and Alarm Bells drummer, for an ingenious RnB/electro fusion. The playfulness of their pop calls to mind The Go! Team and even the finer moments of Girls Aloud. Seriously. Tell You What could well be the catchiest single of 2015 you never heard – best put that right, eh? Since it’s the festive season, here’s Bossy Love’s reworked cover of The Waitresses classic Christmas Wrapping, renamed Christmas Rapping.