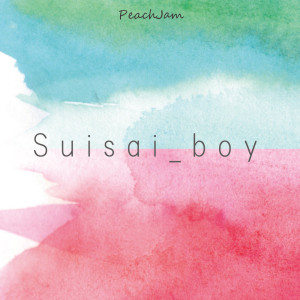 This sort of sound — bubbly electronics taking cues from, well, all sorts of strains of contemporary dance and pop music, capped off by digitally distorted vocals — has been gaining traction in Japanese music in recent years. “Suisai Boy,” the first song from the duo PeachJam (which is artist Jam Boy teaming up with PinkyLab) is a pretty strong example of this surfacing trend, one that has gotten mainstream looks via Tofubeats but also gets played around by indie artists as well. PeachJam’s “Suisai Boy” — technically part of an EP, but one featuring only a brief intro, alongside the main track’s instrumental and vocal — fizzes along thanks to a skippy beat and some sweet electronic droplets, the pair making this all the more sticky thanks to a little bit of jazzy bass lurking beneath the carbonation. It’s a hoppy pop number until the hand claps come in, building up to “Suisai Boy” bursting into an instrumental interlude. Whatever direction goes, it ends up being a refreshing number. Get the full set here, or listen to “Suisai Boy” below.