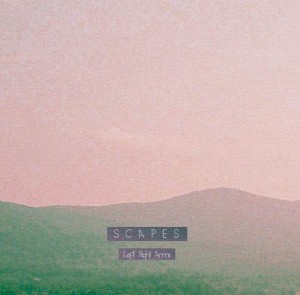 New MAP! This month, we highlight Left Right Arms. Check it out, and a bunch more of great tunes from around the world, below.

Click the play button icon to listen to individual songs, right-click on the song title to download an mp3, or grab a zip file of the full 24-track compilation through Dropbox here.

JAPAN: Make Believe Melodies
Left Right Arms – Rest
Rest is a song that comes across as though it was recorded under blankets, like the driving sonic aim was to imagine what someone breathing on your neck sounded like. Fitting, considering Left Right Arms records everything from his bedroom in Tokyo, the close quarters coming across clearly in this woozy, ultimately vulnerable moment.

ARGENTINA: Zonaindie
Los Tiros – Autocontrol
In the past weeks we’ve been listening to Denso y Moderno, the first album by Los Tiros, in a non-stop loop. This band from Quilmes, a city in Greater Buenos Aires, delivers a pop-rock sound with lots of synthesizers and optimistic lyrics. The album has 11 tracks, all potential hits, and Autocontrol is one of them.

CANADA: Ride The Tempo
TMPL – Voyij
TMPL are a relatively new electro-pop duo from Toronto made up of Kevin O’Brien and singer-songwriter Eli Andreas. By new, I mean they have this one song out called Voyij that takes you on an expansive journey of sounds that gets more exciting at every corner.

CHILE: Super 45
Histéricos – Misplaced, Displaced
They chose the right name to express their no-limits energy and rage. Histéricos is a four-piece rock band that always trusts in a good melody and have some clever things to say. At the end of 2013 they released their debut album Misplaced, Displaced (Algo Records) and here we present the title track dedicated to “the ones who get it wrong. The losers, the outsiders. To those who suffered loss and regret. To those who question why”, as they write in their manifesto.

COLOMBIA: El Parlante Amarillo
Los Elefantes – Yo Soy Un Gigoló
The life of the Colombian capital is reflected by the Jamaican music, mainly ska, that Los Elefantes have made ​​for more than 18 years. Feeling independence as a way of life, they are releasing their fourth album, Grandes Exitos de Otros, from which we present the song Yo Soy Un Gigoló, a classic version of Just A Gigolo/I Ain’t Got Nobody, with the lyrics touched by irony.

DOMINICAN REPUBLIC: La Casetera
TipiHop Project – Suéltame Que Bailo Solo
TipiHop Project’s mission is to blend Dominican native genres with modern electronic and hip-hop rhythms. Anyone who’s had the opportunity to dance a fast-paced merengue would argue that is nearly impossible to slow it down, but the guys behind TipiHop found a way in Suéltame Que Bailo Solo, the instrumental opener of their first album. The namesake LP has been brewing for almost three years, but now they’re ready to show their musical richness.

ECUADOR: Plan Arteria
Sweet Sandra – Nakkked
Sweet Sandra is a trio based in Quito who use distortion, electronic bits and punk. Their first release, Nasty Disco, is an album of 10 songs. Nakked has heartbreaking screams between the twisted outbursts of drum machine.

FINLAND: Glue
Cats Of Transnistria – San Francisco
Formed earlier in the year, Cats Of Transnistria is an exciting blend of dream-pop vocals and fuzzy, psyched guitar and keys by the duo of Henna Emilia Hietamäki and Tuomas Alatalo. The band has just released its first recording produced by Black Lizard’s guitarist/vocalist Paltsa-Kai Salama.

FRANCE: Your Own Radio
Andrea – More To Me
From Paris’ indie electronic scene, Andrea plays beats like a surgeon – meticulously. More To Me is the perfect song to chill out to in bed on a Sunday morning. Andrea is also the kind of crazy guy who has a project to produce a sample each day during a month – take a listen to Day 4, which samples Sam Smith.

GREECE: Mouxlaloulouda
Pete Sun – Ocean (You)
Drawing influence from sun, sea, urban life and relationships, Pete Sun’s sublime third EP, Phantom Express, contains three shimmering lo-fi, romantic dream-pop songs to hold close to your heart. With his simple, poetic, yet sensitive lyrics and an intimate voice that’s as if he’s whispering a secret into your ear, Pete Sun creates a beautiful scenery to lose yourself in.

INDONESIA: Deathrockstar
Napolleon – Rendezvous
After a long musical journey, young Bayu Andrianto’s decision to put reverb on vocals and guitar resulted in raw, space-rock songs. They have been talked about amongst music enthusiasts in Indonesia for the past few months, with hotly-anticipated performances and an album to look forward to.

IRELAND: Hendicott Writing
Blooms – If I
Blooms’ euphoric yet mellow style of ambient electronica is the brainchild of Louise Cunnane, an Irish woman based in London. The If EP features toned-down flow, soaring soundscapes and stunning vocals, recalling the 5am bliss-out at the end of a manic beach party. If I, the free-to-download EP’s standout track, builds on subtle R&B influences to create a memorable early effort. Cunnane’s delicate potential is abundant and beautiful.

MALTA: Stagedive Malta
TroffaHamra y Los Mechones – Donde Estás Tú
TroffaHamra (Ruth Abela) is a Maltese singer-songwriter who went travelling to Barcelona in 2010 and ended up staying there. Not much later she formed her band TroffaHamra y Los Mechones, in which she sings and plays guitar, together with four Catalan musicians. Together, and due to their different musical backgrounds, they created an original sound. TroffaHamra’s songwriting is fresh and sincere, and influenced by life experiences and strong emotions. The style of the band sways between swing, bossa nova, folk and Western ska – a mixture of sounds, languages and moods.

MEXICO: Red Bull Panamérika
Navukodonozorg – The Goat Of Zachary
He may not be the king of Babylon, but he could well take the throne of Mexican electronica. He may not be named after Morpheus’ rebellion ship in The Matrix, but his music will surely take you on a trip through a decadent post-industrial underworld. Hailing from Veracruz in the Gulf of Mexico, Navukodonozorg unleashes a work full of dirty bass, complex rhythms and nonsense melodies. Take the ‘red pill’ and submerge in this fabulous futuristic wonderland.

PERU: SoTB
Catervas – Atemporal
Catervas is one of Peru’s most beloved and essential bands. Their long career, embodied in three albums, has contributed some great indie rock with melodies full of excitement and inspiration. This year the band will release their fourth album; Atemporal is its first single, a nostalgic song that honors the classic sound of Catervas.

PORTUGAL: Posso Ouvir Um Disco?
Moullinex – Love Magnetic
Moullinex is the project of Luis Clara Gomes, a DJ with a remarkable body of work as a producer. His first album as Moullinex, Flora, was released in 2012 and, following two EPs in 2013, a new album is due at the end of this year, which Love Magnetic is an appetizer for. When not working as Moullinex, Luis keeps himself busy remixing other artists (Cut Copy, Sébastien Tellier, Two Door Cinema Club, WhoMadeWho) and managing the label DiscoTexas which he co-founded.

PUERTO RICO: Puerto Rico Indie
fAi – I Thought The World
fAi is a new project from producer/composer Hector “Stonetape” Hernández and singer Beatriz Faísca. They recently released their first single, the catchy and sweet I Thought The World, a generous slice of perfect summer indie-pop that promises great things from the duo. Stonetape continues to demonstrate his studio chops throughout the song, achieving a confident and measured production, while Beatriz truly surprises with a voice equally mature and flirtatious.

ROMANIA: Babylon Noise
The Boy Who Cried Wolf – It’s Just A Rebel, Sir!
The Boy Who Cried Wolf started their activity when members of two local bands (CHESTER and Breathelast) from Bucharest collided, with a mission to write some tunes that would better react to their primal needs to play wild, fast-paced metal combined with hardcore/punk vibes. In 2013, The Boy Who Cried Wolf released their first debut record, Bad Time Stories, available from Bandcamp as a pay-what-you-want download.

SCOTLAND: The Pop Cop
Foreignfox – Yoghurt
No matter how much you think you’re ready for it, the song Foreignfox introduced themselves to the world with, Yoghurt, still knocks you sideways. The raw, stomach-knotting emotion of Jonny Watt’s struggle to come to terms with his father’s cancer diagnosis is unravelled in lyrics of rare candour, backed with some sweeping guitar work and a suitably tear-inducing promo video. Foreignfox’s debut EP, We Float Like Sinking Ships, is available on Bandcamp.

SOUTH KOREA: Indieful ROK
Messgram – My Funeral
Messgram markets themselves as a modern heaviness hailing from Korea. They put out their first EP a few months ago and recently finished third in the Korean leg of the Redbull Live On The Road competition. With a female vocalist, the style often reminisces the popular gothic metal-influenced bands of the early 00s, but rather than sounding dated, Messgram gets a special edge by blending it with post-hardcore. My Funeral perfectly exhibits this exciting combination.

UNITED STATES: We Listen For You
Conveyor – Theme XIII (Edit)
Brooklyn’s Conveyor has recently released a fascinating double LP where they reimagine the score for the cult film THX 1138. These expansive soundscapes creep into your brain and create the most perfect moments of sonic serenity.