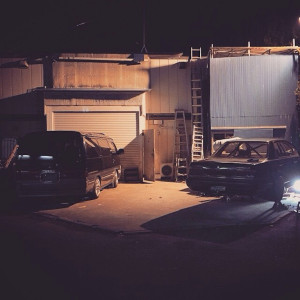 Time for the May edition of the Music Alliance Pact, featuring one of Make Believe Melodies’ favorite songs of 2015. That would be Half Mile Beach Group’s wind-swept “Twilight,” the lonely stroll-on-the-beach song we all deserve. Listen to it, and many more great songs, below.

Click the play button icon to listen to individual songs, right-click on the song title to download an mp3, or grab a zip file of the full 19-track compilation through Dropbox here.

The image that the beach city of Zushi, south-east of Tokyo, has conjured up in recent years has not been particularly positive. It was a rowdy spot and then the local government banned loud music and other fun times from the coast. Thank goodness for outfits such as Half Mile Beach Group, who on Twilight present a windswept and haunting view. It is not quite summer bliss, as the whole thing sounds appropriate for the slow season, but it is a gorgeous representation all the same.

This new musical project by Martin Reznik (La Filarmonica Cosmica) almost started as a game in 2012, when he recorded several songs on a weekly basis. Some time afterwards, while reviewing the material, Martin realised he had an album in his hands, so he spent the next months polishing the songs and re-recording some instrumental tracks. He also invited musical friends to participate in what became a folk album with a soft psychedelic vibe. Suicidas Melodías is one of these collaborations, in which singer-sonwriter Sofía Viola lends her wonderful voice. You can download the full album from Bandcamp.

AUSTRALIA: Who The Bloody Hell Are They?
Arvo Tanty – White Hum Valley (Hello)

Arvo Tanty is an introduction to producer Michael Dolan’s solo material, following his work with electronic outfit Perth. White Hum Valley (Hello) is a grandiose, cinematic Casiotone orchestra track where slow, effacing rhythms pulse and dissolve at surface break. Dolan says the song was inspired by Joni Mitchell, Mort Garson’s Plantasia and his yearning to make a “Nintendo soundtrack of some kind”.

Montag’s Dream, the opening track of Otis Trio’s debut album 74 Club, probably refers to the main character of the novel Fahrenheit 451. The dark jazz they create fits perfectly with the despair related in the book.

Toronto artist Nina Bowz specializes in artful electro-pop that has quirky twists at every corner.

The lack of spirituality is a recurring theme of living in big cities, and for Urban Monk this is a starting point in their musical history. After a season in Brazil, Chai got together with Dhanur to bring out the sounds inside their heads. They have followed up their 2013 debut Primavera En Secreto EP with this year’s release of A Lua – a mixture of pop, rap, shoegaze and Krishna life by these friends from La Serena.

Bogota’s Planes (Estudios Universales) previously appeared in the Music Alliance Pact in August 2012 and much has happened to them since then. Many trips, festivals, soundtracks and the release of their 2014 debut album Las Americas. In it, they continue their wave of dream-pop with alternative rock, creating a beautiful place in the soul of those who listen to them. Album closer Fue Siempre Lo Mismo is a song that speaks of encounters and disappointments.

This month we try something different, serving up an exclusive taste of a 15-year-old album. Speaker Bite Me’s If Love Is Missing It Must Be Imposed was originally released to little critical acclaim, but it has since grown to become a Danish rock classic and now it’s out on vinyl for the first time.

Les Petit Bâtards, with members under 19 years old, have become one of the most acclaimed new bands in Ecuador and are definitely worth keeping an eye on. One reason to believe in them is their intimate, touching first single, Ficción.

Manos Milonakis produces modern classical music for films and theatrical plays, as well as for his independent solo work. The original score for Thanassis Triaridis’ theatrical play Zyklon Or The Destiny is a magnificent set of 10 tracks awash in textures, atmospheres, moods and emotion. His music winds its way through your mind and moves your soul. You should also check out the main theme for the documentary Drink And Be Merry.

With ukulele, guitar, bass and live loops, Yogyakarta band Answer Sheet bring diversity to Indonesia’s indie-pop scene. You might love how these guys sing in English with a slight Javanese dialect.

IRELAND: Hendicott Writing
Comrade Hat – One Of Them

Multi-instrumental, multi-talented member of multiple Derry acts, Neil Burns – known in this particular guise as Comrade Hat – will throw that hat over anything that catches his fancy. One Of Them is a fine example of his work, designed on piano and guitar but constructed using a delicate touch on synths. Think Moby’s blissful corners constructed using the Rockies for inspiration. This is out of sync with the zeitgeist and all the better for it.

“As if Raymond Carver got drunk in front of the typewriter while Dinosaur Jr’s Green Mind plays on the turntables” – I really like this sentence from the press release for Giving Up On People, Pueblo People debut album. I think it really tells something about the way these songs are written, the spirit behind this raw, powerful music. The guitars are loud, the drum and bass are tight, the vocals are harsh and grasping. Life up against the wall, bad luck, growing up and going separate ways. For sure, one of the best Italian indie-rock albums this year.

Mistura is a duo whose songs, exclusively in Maltese, have elements of blues and rock, both electric and acoustic. Debut album U d-Dinja Tkompli Ddur, released in October 2014, is a rock concept record divided into four sections of four songs each. Packed with biting social commentary, especially in relation to local issues, it reflects on the theme of repetition and cycles of life. Antonio Olivari and Malcolm Bonnici are the main members, but they also perform as a full electric band with additional musicians.

Error.Error is the project of Efrén Valenzuela, a young musician and beatmaker from Hermosillo, Sonora on the north-western desertic corner of Mexico. He is the founder of the netlabel LALALA4e and also operates under the Zonzobot alias. Error.Error recently blew us away with his newest track, written as Γ, an incredibly chilling piece which the artist has branded “reggaetrón”. Γ was accompanied with a futuristic, must-see 3D video created by the artist himself.

Physic began to attract vast attention with only a couple of songs earlier this year, leaving us eager to hear more of their dark post-punk. Fortunately for us, they have just released their self-titled debut and Never Satisfied is one of the jewels of this remarkable album.

Beautify Junkyards’ first album, released in 2013, contained only covers but it drew the attention of many radio stations and journalists, and they were invited to participate in a Brazilian television documentary along with David Byrne, Devendra Banhart and M.I.A. Their new album of original material, The Beast Shouted Love, was released this month and it is one of the best records I have heard this year. It will please fans of Goldfrapp, Beach House, Melody’s Echo Chamber and Foxygen.

Every so often you come across a new song that’s so obviously better than anything you’ve heard in months that it stops you in your tracks and makes you realise how much better life is to have it in it. For me, that special something is Righteous Man by The Great Albatross. The creator of this exceptional acoustic heartbreak is A. Wesley Chung, an American based in Glasgow. Righteous Man (video here) is taken from recent EP Roots, which features Avi Zahner-Isenberg from Avi Buffalo – he and Wesley are former bandmates.

Johnny Azari doesn’t pull any punches with his blues. This is in your face, razor-edge reconstruction of a genre that’s gotten soft. His music is the last swig of whiskey after a long night of drinking. The dark alleyway. This is real-life emotion through music and he’s not cleaning it up just to make a few casual listeners more comfortable.