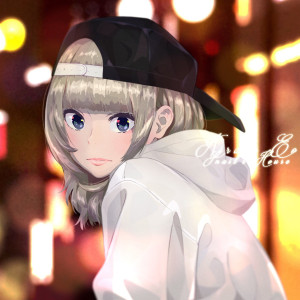 There was a week where I nearly only posted “kawaii bass” music…remember that? Well, it was kicked off by producer Snail’s House, who had been sharing bouncy tracks on SoundCloud loaded with cute, cut-up vocal samples and so forth. It at times could be a little too cuddly, though with more than enough going for it to avoid being a big pile of fluff.

Snail’s House teamed up with netlabel Trekkie Trax…an imprint I wouldn’t define as “kawaii”…for the Kirara EP, and the resulting release finds the maker easing up on the cute, resulting in a really strong listen. There is still a healthy amount of squeaky voices and cotton-candy touches, but whereas earlier tracks sometimes got a little too playroom friendly, the songs on Kirara boast a harder edge, made clear on the opening title track. Even small details…a bass blurble in the otherwise skippy “Nyan Nyan Angel!, the beat on “Fuwa Fuwa Toybox”…add a nice tension to Snail’s House music. Get it here or listen below.