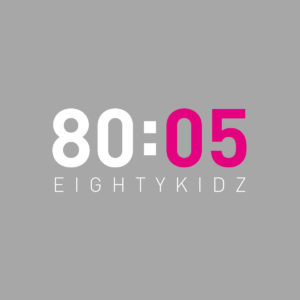 80:05 reflects a simplification of sorts for the electro duo 80Kidz. They’ve never exactly been a particularly straightforward unit, having come up during the heyday of blown-out bloghouse. And their music has always been a very hit or miss undertaking (again, bloghouse), but the moments of brilliance always used to balance out the cringe-ier exercises in Cobrasnake-core. It also resulted in one flat-out killer album, 2010’s Weekend Warrior, a set featuring songs that sound as fucking affirming now as they did seven years ago jesus. But the albums and singles in its wake pushed too hard, the duo leaning too heavily on guest vocalists who gradually felt like fossils (you didn’t need the guy from Jamaica pretending to sound like Thomas Mars in 2011, and you sure as hell didn’t need him in 2016).

So here comes this new release, a continuation of an old thing 80Kidz did when they were getting too deep into this crossover shlock, where they made “dance tracks” aka what they are best at. And these three songs are so good! “Reversed Note” props slinky piano and violin swells up against pounding beats, creating an honest-to-goodness tension so much of their music has lacked in the past half-decade. “No Wave” moves harsher, but works because it just lets the acid-tinged synth rumble forward without having to deal with any unnecessary vocal additions. And “Butter” goes one better, a dizzy little bit of half-second sounds that genuinely makes me want to have a bloghouse revival go down. There’s no doubt 80Kidz have done some good stuff in recent years, but very little of it approached the simple and focused tunes found here. And they have one coming out every month. Get it here, or listen below.