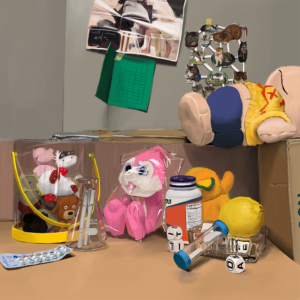 Kenkou functions not just as a bubbling and playful set of pop, but as a mini-celebration of Fukuoka. Producer Abelest hails from the city, and two of the three guests joining them on this release via Maltine Records also call the Western Japanese hub home. And they come through with some fresh ideas on busy dance-pop. Mastarrja jumps on “Shokuji” to contribute some warped vocals over music that moves from strobed-out to syrupy and accented with strings, every busy detail falling into just the right place. “Suimin” featuring Takeshi Fuwa starts jarring enough — a sample of Ronald Reagan speaking at the Berlin Wall, OK? — before flipping to a similarly fizzy but slightly less crowded beat giving the guest room to stroll over. Even when a non-Kyushu voice enters on the title track — courtesy of Shizuoka’s Yukichikasaku /men — the end result if Abelest and company turning what sounds like a jarring and clanging mix of sounds into something approaching pop bliss. Get it here.