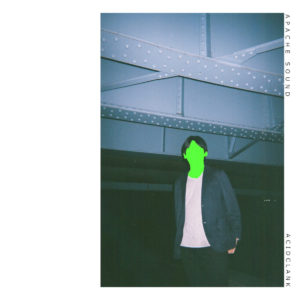 Shoegaze endears in the Japanese music community. Walk around certain music-leaning neighborhoods in the capital and the odds of bumping into someone who spends their Thursdays after work getting lost in distortion is pretty high. The downside to this is a lot of groups who listen to Nowhere on a weekly basis making songs that sound the same as every other downward-facing band in Tokyo. It’s charming that so many subscribe to the style, but anyone can go online and just listen to Loveless now, we don’t need more imitation of that!

Acidclank always seemed one step ahead of tired worship, working in new elements into distorted rock over the last few years. But nothing could have predicted Apache Sound, their latest album and a welcome ripple from the shoegaze side of Japanese indie rock. The burbling electronics of intro track “Riot” underline the change to come, and then the title track trudges in. No guitar squall, no fuzzed-out voices; rather Acidclank uses ample space and an understated beat to create an ennui-dripping number filtered through electronic vocal filters. They even work in a lonely sax solo, letting the song tease a turn to funk but always staying somber. There’s more experimentation with machine beats on Apache Sound, whether on the swift exercise of “Funeral” or via hip-hop-inspired thump on “Ghost Record,” which also drops in vocal samples from rap for the album’s biggest detour. But the spirit of shoegaze still comes through, even if the tools are different…and Acidclank makes room for more familiar escapes into noise on numbers such as “Addict Of Daydreaming” (or, uh, “Downtime Acid Jam,” as the two are exactly the same song. I think an upload error?). Apache Sound is anything but trapped in familiar formulas, and shows how many chances for mixing it up familiar formulas hold. Get it here, or listen below.