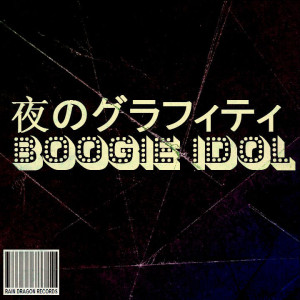 One of the problems with “new City Pop” — a “trend” created by music stores and slapped on artists such as Cero, Mitsume and Shiggy Jr. among more — is how un-glitzy any of the acts corralled into it actually sound. City Pop, especially during Japan’s Bubble peak, was often times grotesque in its shininess, capturing life in all its extremes, with a surplus of saxophone solos to go around. At its best, artist could turn that excess into something dreamy and life affirming, tapping into something well beyond what money could buy. New City Pop doesn’t even come close to this, and mostly just sounds like rock.

Thank goodness for the likes of Boogie Idol, who comes closer to the neon ecstasy of (well, what we 20-somethings imagine) ’80s Tokyo to sound like on the new Yoru No Graffiti collection. It features all the sounds that crop up in City Pop numbers — tight bass slaps, cascading synths, a general feeling of “yeah, this would sound great while driving fast on a freeway at night” — and Boogie Idol lays them out to make sparkling numbers with a bit of a dreamy edge (see the final track). Here’s a retro revival done well. Get it here, or listen below.