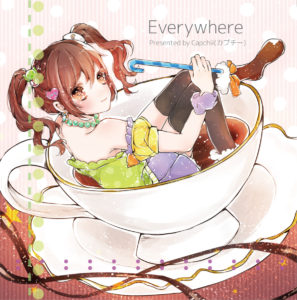 Cute comes in many forms. Producer Capchii embraces a more aggressive take on cuddly sounds within the new album Everywhere, approaching the steel-box heaviness of Yunomi but using bright synthesizer and dance sounds to construct it. The songs here are packed tight, from the dog-bark-featuring density of “My Friend” to the darty “The Piece Of Memories.” Tracks tease something soft, but then let an avalanche of sounds and beats cascade downward on the listener. Even the guest vocalists — or guest software, as Hatsune Miku appears on “Melody Line” — end up being just another frantic moving part in Capchii’s high-energy cuts. But the producer knows how to do constant energy, and Everywhere proves a fun listening, even if a break in the middle to relax might be in order. Get it here, or listen below.