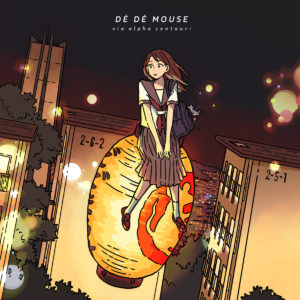 De De Mouse always knows how to brighten up a mood. He played this weekend’s Ultra Japan 2017 festival, and his set was such a joyful blast of chopped-up syllables and keyboard twinklings. A fair amount of said performance featured cuts from the recently released Via Alpha Centauri, a bright set following up this year’s Dream You Up. While both carry on a sci-fi theme of sorts — this EP is inspired by the story Night On The Galactic Railroad — his latest veers closer to last year’s Summer Twilight, eschewing the R&B inspired vocal hiccups of Dream You Up for a De De Mouse throwback. The same shimmer comes across on cuts such as “Wanna Dance,” with voices split so they found particularly fluttery, and the sparser “Rigil.” Another link to his EP from last year — more pronounced Japanese instruments, such as on the July fireworks-display of “Otters For Fete.” Get it here, or listen below.