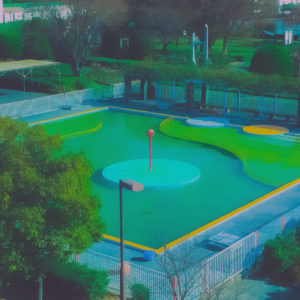 “Bedroom pop” implies a certain amount of roughness. This is, after all, music made in the same spot someone sleeps, a space like that doesn’t imply top-notch quality being guaranteed. But — and I’m not breaking ground here with this observation — artists have become far more sophisticated with how they create music, resulting in stuff that can sound incredible, if not top notch. Feather Shuttles Forever have been piecing together some of the more intriguing numbers to come from an independent project in the last few years, and with Zujyo No Seaside Town it all comes together into something triumphant. The pair of Hikaru Yamada and Mukuchi skip between synth-glazed members and brassed-out number…sometimes the two dies coming together…but always being intricate and catchy. Here’s the first real earworm album out of Japan in 2019 (and a nice change-up from Local Visions…no real experiments in nostalgia, just solid songcraft from start to back).

A handful of these songs have popped up online before, but that only makes Zujyo No Seaside Town the defining document of Feather Shuttles Forever. The title track is the most thumping thing they’ve ever recorded, guided by synth squiggles and one of the more persistent beats found in their catalog, balanced out by understated vocal delivery and a passage where they just throw every idea into the mix (piano fingering! tropical woodwinds!). “Shiroku Tsumetai Utsuwa” loads up on horns and unfolds at uptempo, leading to some wild saxophone blurts and all-together-now singing that just does a fantastic job lodging itself in the brain. Mellower moments bubble up later on — though even something like “Oka” always feels a little tipsy, like it is seconds away from tumbling over the acoustic guitar plucks and synths — but Feather Shuttles Forever do jaunty best. Their opening team up with fellow Local Visions releaser SNJO goes from hop-scotch to loopy synth explosion by the final stretch, while closer “Teian to be continued edit” updates an earlier jam featuring a bunch of familiar faces into a triumphant closer. A fitting end to a breakthrough. Get it here, or listen below.