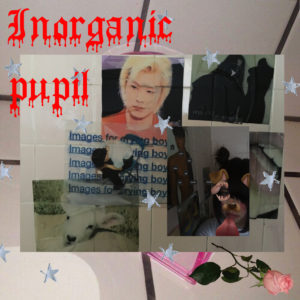 Cuteness has become one of the more dominant traits of just-outside-of-mainstream Japanese music over the last few years, with producers piling on the bells, xylophones and assorted doo-dads to create playroom-ready compositions that feel like they are on cola number six. Many of those releases come alongside artwork done up in an anime style, full of cute characters and moe girls. Even the songs themselves, by the likes of Snail’s House or Nyankobrq, often feature samples of cartoons in them. Not a totally new development — no shortage of anime raves over the years playing with pretty much the same template — but this hyper-cute, maximalist style is having a moment right now.

The music Fuji Chao makes also contains a lot of anime samples. They popped up on last year’s excellent Tanoshi Bunretsusyou, along with her other scattered works, and they appear frequently on her new album Inorganic Pupil. This set contains all the parts that made Tanoshi Bunretsusyou one of our top ten albums of the year — this is an intensely personal album, with Fuji Chao appearing on most of these songs, whispering over them like an audio journal. And it further shows her development as a beat maker, crafting contracting dance numbers (the title track) to dreamy backmasking (“Broken Eyes”). One late song here, “Electro Girl,” works around with ideas you see a lot in so-called lo-fi house, and makes me think Fuji Chao and Ame To Kanmuri should hang out.

Yet that is all sorta expected, and can probably be revisited in the future. What has stuck out about Inorganic Pupil on a few listens over the last few days for me has been the anime voices. I’m so used to the cute, the overly sweet, the sort of cartoon-stereotype feel dotting so much Japanese (and beyond) music right now, the sort of safe retreat into youth — or something — that a lot of younger producers are opting for. They don’t pop up on every song — and they can be cute, sure — but in Fuji Chao’s hands these animated voices, however springy, get dropped into far darker songs, where even the chirpiest voice takes on an edge of menace. No song does it better than the seven-minute-plus “Neiro,” featuring two young women talking with one another about assorted topics — including parental death — while the music subtly morphs around them, amping up the emotion. Rather than treat them as a dollop of cream on an already sweet cake, Fuji Chao finds something far more complicated in these samples…which fit in wonderfully in her music. Get it here, or listen below.