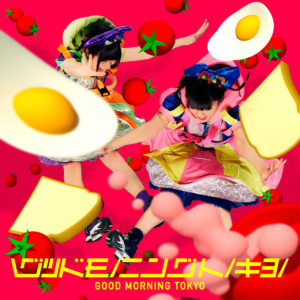 Ehhh, screw it, let’s lean in on this “kawaii” thing for today.

Via Attack The Music, idol duo Happy Kuru Kuru shared a new two-song set called Good Morning Tokyo. The pair themselves are quite in line with what most people think of Japanese idol music — cheery vocals that are far from polished, songs about relatively upbeat and low-stakes subject matter — and aren’t really the hook for this release. Rather, that would be producer Yunomi, whose cuddly-meets-breakneck electornic sound has slowly been creeping into the mainstream. The two songs here are mostly a reminder of Yunomi’s approach, the title track in particular being a bit boilerplate in exhibiting the merger of helium voices, traditional touches and big jackknife drops. Which, nothing wrong with that when one is that consistently solid. “Green Green” offers something more playful — the first half of the song is basic idol schlock, all bright-day melodies and now-together singing approaching the obnoxious. But then Yunomi rolls through and rips it apart, transforming the song into something I haven’t heard from him before…a hard-edged dance number actually working in tandem with the idol parts. It’s a strange new manifestation, and a fun one here. Get it here, or listen below.