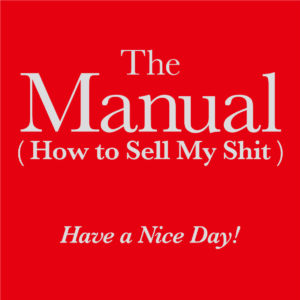 Ahhh, a day away from December which means many things…one of them being the futile catching up on albums that have zoomed by us (read: me), or giving works that seemed sort of forgettable in the first half of the year another shot (yesterday I tried listening to that Drake album…still really bad). Have A Nice Day!’s second original release of the year, The Manual (How To Sell My Shit), builds on what the band established on Dystopia Romance 2.0, to the point where the prior felt more like a preview of the latter (the inclusion of the particularly anthemic “Love Supreme” and slightly more unsettling “New Romance” on both being a bit of a giveaway).

As a distillation of what Have A Nice Day! do so well, it’s tough to beat The Manual (which, even the name kind of pokes fun at it). This is a band that is not worried about complexity, opting instead for synth-backed anthems that prioritize passion — probably a byproduct of this being a live group first and foremost — over anything else. They certainly get funny, but songs such as “Midnight Timeline” turn a benign activity such as using the internet late at night into something life affirming. And it isn’t all simple starry-eyed odes to living — “666” features a Glitter-inspired march that makes it one of the album’s darker cuts, while “24hours” uses a skittery garage beat as a foundation for an unsettling number. Yet ultimately this is a band capturing basic emotion and blowing them up into a simple but forceful way like few others. Get it here, or listen below.