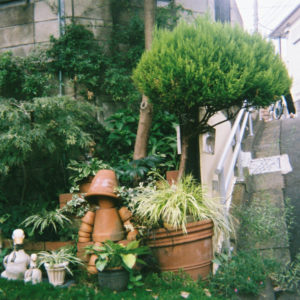 It’s that wonderful time of the year, after the holidays and after a vacation spent abroad wherein I desperately try to catch up on all the music that came out during this time away. Making this even more difficult is the stream of news stories coming out, both music related (Keyakizaka46 seeing several members faint during their Kohaku performance) and beyond (blackface scandals on New Year’s TV, certain YouTubers doing thickheaded things). Yet the mission continues, and here’s one of the bigger ones to slip by…producer Hercelot released the album Slowalk on Christmas Eve, and its a wonderful stroll-turned-sprint that finds the artist refining their sound. Samples remain central to the songs here, but whereas once Hercelot created cartoon craziness out of them, Slowalk leans towards more meditative zones. “qrleslove” moves forward on piano chords interrupted by place-setting samples, while “a stuffed lion” brings up some serious The Books vibes with its stitched-together strings. For at least half of its play, Slowalk plays like a slightly warped cousin to Le Makeup’s Hyper Earthy, a set celebrating regular daily life and the memories passing through it. Yet Hercelot does speed things up later, though not quite to the pace of previous works. Just check the twinkly skip of “A Long Walk To Lethe” for one highlight, which imagines Lulltaone after ten cups of coffee. Get it here, or listen below.