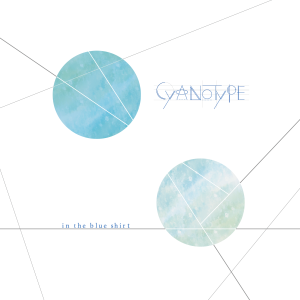 And we are back from our hiatus. This week we will catch up on music that came out at the end of December/very start of January, along with any new stuff that catches our fancy. Maybe that will mean more posts than usual, maybe I’ll let my still-lingering cold beat me and just go to bed early everyday!

Osaka’s In The Blue Shirt works like a genetic engineer, rearranging a song’s molecular structure in such a radical way to transform it into a skippy, joyful mutant form of what it once was. Take “Cluster A” from the recently released Cyanotype via Maltine Records. It’s a breezy number, featuring whistles and a shimmying beat, pushing the sliced-up vocals further and making for a frantic afternoon jog of a number. Yet zoom in on the words — whether they be pitched up, down or left alone — and you’ll pick up that the singing comes from Lorde’s “Royals,” but cut up and taped back together in such a way where it has become a completely different beast. Many dabble in this sound, but few can make it work so well like In The Blue Shirt, who gets triumphant on the horn-lead opener “Secret Crush” and goes lightspeed frantic come the vocal rush of “Signs Of Romance.” Get it here.