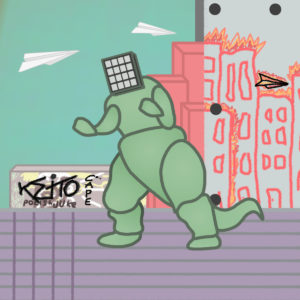 The international connections struck up by footwork producers are among the best aspects of this genre, beyond the music itself. Here’s one case of producers leaping over borders to create something great. Japanese artist KΣITO’s new Cape EP comes courtesy of Polish Juke, a label offering just that and worth investigating for all with an interest in all that skitters. It’s a nice intersection made even better by Cape being one of the strongest Japanese juke releases of the year. KΣITO plays around with a chilly and unexpected set of sounds that this one stands out right from the title track, a rumbler moving between icy synth pricks and organ-like notes that give this an unsettling vibe that also isn’t obvious about it. “Prefecture” speeds up tropical sounds and turns it into a whirlwind, while “Calm” transforms from chest-thumping to delirious with the introduction of a bright keyboard line midway through. There’s so many little details to pick up on, but in the process the central groove isn’t sacrificed. A first half of 2018 highlight. Get it here, or listen below.