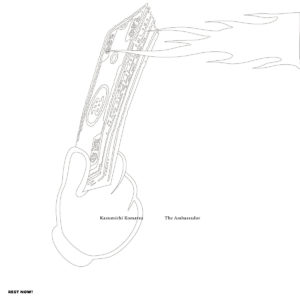 The artist formerly known as Madegg has been all over the place this decade. The Kyoto producer came up in the first half of the 2010s, in orbit around the Kansai region’s INNIT parties and seemingly releasing new tracks built around Brainfeeder-adjacent beats every other day (impressing a member of Perfume along the way). As the years went on though, his output slowed, re-orienting around albums such as the still-strong NEW. He then started leaning into more experimental territory, beats vanishing in favor of soundscapes. At times interesting, listening to his music and seeing him live could feel frustrating. It felt more like a grad school project than something to get lost in.

The Ambassador strikes a balance between the head and the heart. Released under his real name, this full-length comes with a bit of required-reading baggage — Walter Benjamin and surrealists play a role in surrounding text. Yet the music doesn’t require as much to get into. Opener “♗” envelops the listener immediately, synth lines zigging around samples to create a slightly off balance but ultimately pretty blur. It’s a vibe revisited throughout, from the dim-lit dizziness of “Money” to the more metallic “RAF S,” a number that feels like it is flaking away at times. Beats pop up sporadically, interrupting the music and offering a chaotic injection (see also…the sound of a Windows help box popping up on “SAD&MOB”). It’s Komatsu moving away from Teebs-like beat play in favor of headier fare in the same zone as Oneohtrix Point Never, and doing a damn good job of it.

Often to its benefit but sometimes to its disadvantage, Komatsu wanders off into other grounds across the album too. Vocals pop up, often warped into uneasy otherworld come-hithers. “Never Seen The Devil Look So Damn Clean” morphs from pleasant interlude to sinister descent when everything gives way for some creepy laughing, an idea explored further on the title track via the kind of warped voices you would hear in Silent Hill. These have a purpose, which is something I don’t get from “Info,” with its dueling languages, or “A2’s” sample collage (which…maybe features Lil’ Pump in the mix?). To its credit, even these missteps flow nicely in the album, and it makes the stronger moments all the more engrossing. It’s a strong album, and a big step for Komatsu. Get it here, or listen below.