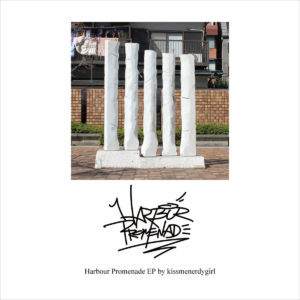 Let’s not get too twisted — plenty of artists have used “future funk” as a sandbox to play around in and come up with compelling takes on the familiar over the years. Kissmenerdygril has been teaming up with singers and rappers for a bit now, so Harbour Promenade leaning into this isn’t a shocker. But, seeing as how 2019 has so far seen internet micro-genre in Japan’s indie scene mutate away from boilerplate to something more intriguing, I don’t think it’s wrong to point to this release as further evidence of a trend. The six song set features familiar sample-heavy instrumentals — from the ho-hum bounce of “Sweet Pain” to Halfby-invoking title track — but the highlights come from the collabs. Kou-kei fits in just fine on the faded funk-hop of opener “Cycle,” a reminder of how effective samples can be when used as bedrock for something new rather than easy nostalgia blasts. Better still is the more relaxed, vocally manipulated delivery of Sola The Luva on “Michiteiku.” Even team ups with other producers result in a mish-mash of ideas that elevate numbers (see the shimmer of “Chiba City Blues”). Get it here, or listen below.