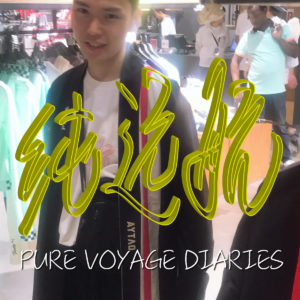 Le Makeup’s recent documentations of daily life haven’t put much of a priority on his voice. Despite aiming to capture the unnerving feeling of a world getting worse, the young Osaka artist has so far avoided using words to do the work for him, letting the music set the atmosphere and whatever syllables get come through being less about meaning and more about capture the off-center mindset of life in the late 2010s. Pure Voyage Diaries sees Le Makeup raise his voice just a little. “My My” plays out like a proper rap song, one in the mold of Lil Peep thanks to the guitar pangs and generally bummer mood accompanying the stuttering beat, with Le Makeup actually delivering some simple but effective rhymes. It’s a shift — one that continues on the title track — but which remains blunted enough to feel apt for Le Makeup’s mood (and, kinda critically, isn’t Le Makeup trying to make his big “Trump stinks” statement or something…it is still more observational, but now more upfront). And then comes “D.I.E.S.E.L” which is like an indie-pop song bordering on pop punk. Huh what, but also I love it. Because Le Makeup excels at sharing where his mind’s at…and here is where he is at. Get it here, or listen below.