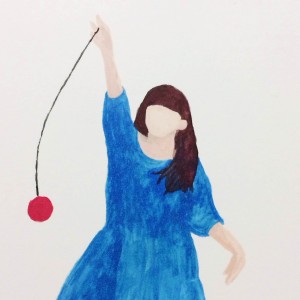 How vital are understanding lyrics for reviewing music? It’s a tricky subject – and one I’ve recently been called out a little bit on regarding Japanese artists. The crux of it being – how can you critique something when you don’t fully understand what they are singing about? It’s a fare question, though just limiting to J-pop (or any non-English music, sung in my native language) seems weird. How important is understanding anything in a song? Didn’t Sigur Ros invent an entire goofy language, and still become critically embraced and eventually soundtrack motivational commercials? But then again…one of the reasons Kyary Pamyu Pamyu’s Nanda Collection was my favorite album of last year was because of the surprising depth of her (Yasutaka-Nakata-penned) words, adding a worry about growing up to otherwise hyperactive sounds. So…what’s the answer?

Thankfully, the artist behind my second-favorite album of 2014 has just put out a new mini-album that doesn’t offer any conclusions but rather sweeps me away via campfire-side spirituals. Tokyo’s may.e offers up lyrics for the songs appearing on Reminder, but it seems pointless to spend time figuring out what they mean. She’s practically driven that point home before – the stunning Mattiola was sung entirely in English, but its follow-up at the end of the year (Shiseikatsu) was in all Japanese. Someone was always out of the loop meaning wise…but that doesn’t matter, because the swirling sound may.e conjures up with just acoustic guitar and her voice is all one needs.

And so it goes on Reminder. She’s once again threading acoustic strums and plucks together into hypnotic patterns, simple but engaging, and then letting her voice do the rest. Opener “Hours” has lyrics…physical words, possibly written down somewhere…but may.e’s delivery of them is far more important than whatever meaning is attached to them, her golden-hour-filtered singing selling the drama by itself. “Metro” is a playful hop-scotch, with lovely bah-bah-da droplets making all the sunnier, while “Hanetari Tobudari” unfolds softer and more delicately, but her voice sounding encouraging as multiple may.e’s come together. “Classical” is her sparsest song to date, one where her voice isn’t multi-tracked and the tape-recorder fuzz remains audible…and what makes her whistling sound like a bird who landed just near her window. It’s intimate and intense. It’s the opposite of closer “Favor,” one of her loudest (is that an electric guitar I hear lurking in the back?) and most cathartic cuts to date, ending with her singing the same line forcefully. Oddly enough, that mantra-esque lyric is “I quit,” which is the one time what may.e’s words have really made me stop in my tracks because of the implication. But, to be fair, I already had goosebumps before breaking out the dictionary.