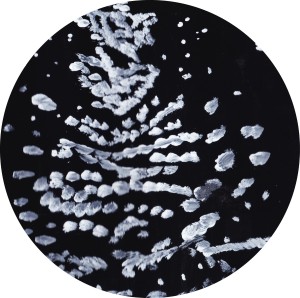 1. What has been stunning about the music released by Tokyo artist May.e up until now has been her ability to turn nothing but acoustic guitar and her voice…and every once in a while, the slightest of percussion…into a hypnotic swirl. She pulled a nifty trick last year by releasing two albums, a move that set her apart from other guitar-and-singing acts clogging Japan – one in English, one in Japanese. The meaning of the words were ultimately not important, but rather the blistering, mantra-like way she delivered them. May.e continued that, for the most part, on this May’s Reminder, a mini-collection ending with her most impassioned song to date.

2. Which makes Spangle such a jolt of an album…this is her sparsest collection yet, one in which the ecstatic release of her earlier work is stripped down into pure confession. She used to multi-track her songs so they turned radiant…but on opener “Three Birds” it is just her slight voice and a guitar, nothing more. “The Ship Detoured” adds slight echo, but that’s it. The curtain falls down, and it is just May.e this time.

3. When the title track starts, its the simplest guitar playing on Spangle yet, accompanied once again by an effect-less voice. Yet at this point the album turns…”Spangle” finds May.e creating an aching song without any bliss-out trickery, but just the iciest of backdrops. Turns out her singing alone…untouched…is capable of a sweet ennui all its own. The words themselves don’t matter, as the sound she draws out of them hit hard all the same.

4. Well, let’s let the first-person loose for a moment. This year, as far as music goes, has been weird for me. There has been good music…there is always good music, somewhere, you just need to find it…but very little has really hit me in the chest in 2014. Last year, there was the aching nostalgia of Shortcake Collage Tape, or the (highly relevant to me at the time, and still moving) growing pains Kyary Pamyu Pamyu faced down on Nanda Collection. And there was May.e’s music. Nothing…anywhere…has done that this year, and maybe I’m just an asshole or burned out or whatever. But part of me stirs, hearing the bittersweet landscape of “Sleeping Face, Continued.”

5. Where May.e goes from here I don’t know…but she’s the best artist kicking around Tokyo’s vast indie scene right now, and Spangle cements that she is capable of all sorts of wonders. Get it here, or listen below.