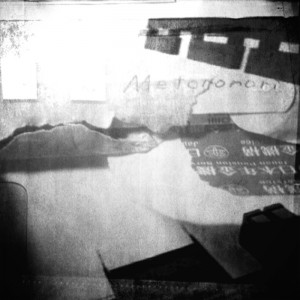 It opens like so much that she has done before – some synths burbling off, Tokyo bedroom producer Metoronori sing-speaking, her voice overlapping with itself multiple times. A stray electronic wisp blows by, and a beat emerges. Eventually the song practically hisses, with even more sounds rising up in the background. This, the first track on Metoronori’s fifth album, finds her existing the same soft, strange and intriguing universe she’s been building for some time now. It is great.

And then it gets interesting. Metoronori has always sounded…mysterious…but on “Yu” she constructs something that sounds like an Illuminati clue. Voices play backwards, she sings in a low voice while keyboard drips overhead, and those gnarled voices keep rearing up. It is the first time something resembling menace has entered her music. And it isn’t the last here. Most of the songs are brief, under two minutes, and some of them sound like warped field recordings. One, the 17-second-long “Past,” manages to cram what sounds like a lost children’s TV show recorded from two rooms away into its frame. “Metoru” is pure fever dream. Taiki, Tape No Hire, Memo Shyuu is Metoronori diving deeper into her world, and unearthing all sorts of strange new corners. Get it here, or listen below.