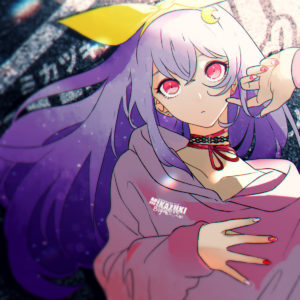 A handful of artists dabbling in future funk are hitting their stride. The internet micro-genre started as “take funk or city pop song, speed up, add kick,” resulting in some catchy moments but mostly a lot of tracks that make you want to listen to the original. But plenty have played around with this format, warping samples into something new or bringing in singers and rappers to turn these fragments of the past into a backdrop for the contemporary. Mikazuki Bigwave tightroped between both sides over the last few years, but Hoshizora Romantic serves as a breakthrough both for the artist and where this style could go. Funny enough, they manage this with only minimal changes — this album is still dominated by swift dance songs built around vocal samples ripped from older songs (though, credit here to the move to draw just as much from like post-21st-cenury J-pop as ’80s anime soundtracks, which helps ripple up a familiar formula), but there’s way more happening in these songs. Along with Moe Shop’s Moe Moe, Hoshizora Romantic takes future funk closer to French touch, a natural connection working wonders from the stuttering opener “I Wanna Be With You” to the brassy stomp of “Bless You.” There’s also new wrinkles to Mikazuki Bigwave’s sound, such as an exploration of downtempo sounds on “Sea Princess” and an especially welcome take on UK garage with “Need You.” It’s the best collection they’ve released yet, and a wonderful argument in favor of opening the borders of micro-genre. Get it here, or listen below.