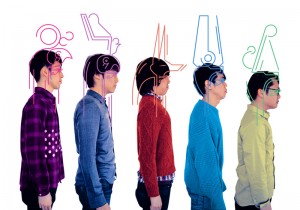 When The Brixton Academy announced that they would no longer be recording under that moniker but instead as Nile Long, one had to wonder if it would also mean a change in sonic identity. The EP the group released last year seemed to signal that, yes, this wasn’t going to be the same collection of painfully earnest synth-poppers – Nile Long sounded locked in, more concerned with moving feet than moving hearts. None of it was bad, but it also lacked the emotions-on-sleeves charm that defined The Brixton Academy, most of Nile Long’s early output sounding like, well, 80’s-aping stuff a lot of people have been doing.

New single “Rush To The Groove” surprises because it finds Nile Long edging back to the sound they carved out as The Brixton Academy, but still managing to make this new project sound different. The vocals aren’t quite as tight as they were on the Nile Long EP, the band allowing them to sound a little more mournful without ever slipping into the Kermit-The-Frog territory TBA tended towards. The big change, though, is in the music itself. “Rush To The Groove” does anything but, avoiding forced fun in favor of creating a surprisingly melancholy atmosphere where every neon-tinged synth sound like a good time, but conceals drops of loneliness. And despite the more subdued move, this song STILL sounds like it would be great 2-in-the-morning dance-floor material. Nile Long are finally getting the hang of it. Listen below.