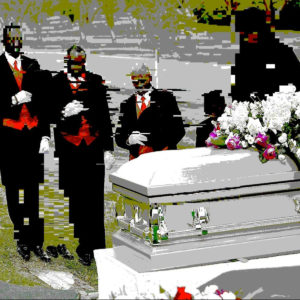 Well, that didn’t take long. Following a lengthy period of silence, Japanese footwork outfit Paisley Parks returned with the glorious Coffin #1 like a week ago. Now comes Coffin #2, a further dive into what the project was cooking up in that relatively silent stretch of time. As you’d expect, this set is a nice continuation on what the outfit laid out in the first installment, featuring some of the more sonically pleasing things they’ve come up with (“Ur Not Fast” and its squeegee synths are ASMR for…I guess me, at least…alongside the bubbling sounds on “ADV”), alongside more direct (well, as direct as a skittery cut can get) tracks. Plus “Unda The Sun,” as claustrophobic as I can remember them getting. Get it here, or listen below.