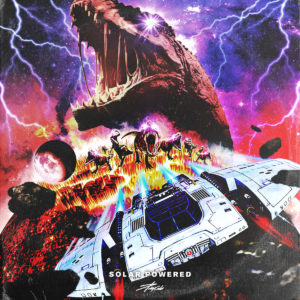 PellyColo covers a staggering amount of ground over the course of Solar Powered. The creator’s ambition came through clearly on the sci-fi-inspired album Universal Catalog, a number that turned spacecraft flight into jaunty synth-pop jogs. Solar Powered keeps the same star-bound imagery while pulling ideas from Gradius and house music among other places. It’s a lot to take in — at 21 songs and more than an hour-long playtime, this one really comes off as PellyColo’s retro opus — but he pulls it off. That’s partially because of the variety of sounds PellyColo explores across this juggernaut. He zooms from cheery synth-powered bouncers (“Vic Viper”) to new wave balladry (“Close In Your Eyes”) to something approaching a zero-gravity waltz (“Metropoliania”).

Simply dipping into different sounds doesn’t make for an interesting listen if the artist can’t make anything worthwhile out of them. Yet PellyColo proves to be adept at almost everything he tries on Solar Powered, creating catchy numbers and more interesting experiments into genres formerly unknown to him. A lot of the charm comes from PellyColo’s use of older sounds not as a nostalgia crutch but rather a set of tools to build with. Despite the ’80s movie album art and vague Lucas-isms running throughout, this one never feels too mushy about the past, but rather more interested in building something all its own from it. The slinky disco groove of the title track gets a little extra energy from the synthesized string swoops, while “Feel The Fire” and “Feel So Fine” recreates guitar-solo-heavy funk without any of the goofiness often attributed to it (let’s also take a moment to appreciate how, when he decides to, PellyColo can make a mean indie-pop number, with “El” and “Make You True” being worthy of Elephant Collective). It’s a lot to take in, but PellyColo manages to keep it absorbing without dropping off in quality across the journey. Get it here, or listen below.