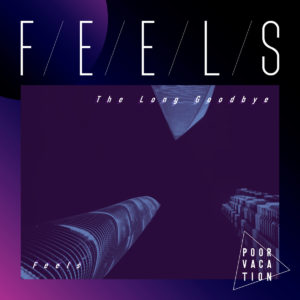 One of my favorite things is when an artist refuses to leave a song alone. I like seeing artists poke at their creations in an effort to find new angles to them — see Spange Call Lilli Line’s multiple versions of “Rio” or even Radiohead’s long-time-to-release “True Love Waits,” to name just a couple. Tokyo’s Poor Vacation has been prodding at the song “Long Goodbye” for nearly two years now, first on his debut EP and then in a sparkling “summer version” last year. Another take on it opens up Poor Vacation’s F/E/E/L/S, and once again he recasts it, this time as a high-stepping bit of city-bound pop, giving it more of a band feel than the dance-heavy incarnations of the past. And that one gets followed up by the title track, a funky synth-pop number that shows the stylistic curiosity the project has.

In a lot of ways, Poor Vacation have been influenced by and taken the place of the now-disbanded Moscow Club, a band that similarly hop-scotched between dance tracks, sytnh-pop and twee…and, who like Poor Vacation, went to great lengths to point out other acts in Japan (they were trying to build a scene, because they knew that’s how you get attention, especially from those overseas). On F/E/E/L/S, Poor Vacation get Pasocom Music Club and Pavillion Xool to contribute fragmented remixes. Get it here, or listen below.