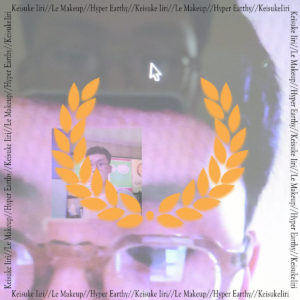 It’s a bit premature to say something like Osaka producer Le Makeup’s Hyper Earthy represents a major sonic shift for the artist. Up to this point, they’ve released one album and a handful of tracks, so small sample size. Yet that previous material was up-tempo, influenced by the sounds of the Caribbean and the Latin world and geared pretty squarely at making bodies move. Hyper Earthy has similar flashes of energy, but it also feels more inward looking and prone to reflection. It also features a lot more guitar splashed across — from opener “Invisible Insecurity” onward, electric guitar riffs ripple through these dreamy songs, joining shreds of voices and synthesizers together. It can still get moving, but even on a shuffler like “Purity” or the fragmented fever dream of “Real,” everything sounds subdued, like some memory is stopping the song from letting loose. And then there are pieces that drift, like “Paper Cave” and “Sketch for Wheat Road” (featuring acoustic guitar). Like a Metome or Seiho, Le Makeup is going beyond simple energy. Get it here, or listen below.