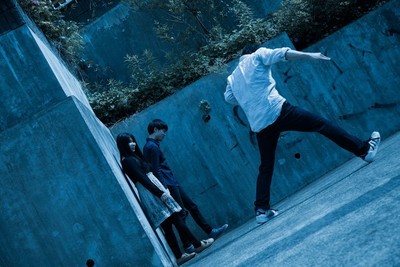 This one’s all about tension. Whereas some of Pop-Office’s new-wave-brushed songs let the emotions bubble up right to the top, “Young Town Blood Turn” takes time to reveal anything underneath the surface, stretches of guitar playing that at first listen sound meandering ultimately being vital periods of noise that bolster the singing. Speaking of…the vocals sound a little understated, albeit a bit trembly, when they first enter, and they don’t stick around for long before the guitars and bass take control. What follows are passages jumping from minimal sound to louder times, the effect being that of being constantly jostled between peace and nervousness. Then the vocals, wordless this time, re-enter and the build lends them an air of drama that wouldn’t have been clear had this just been a no-nonsense pop song. And of course, it all ends with an appropriate climax, but I’ll leave that for your ears to discover. Listen below.