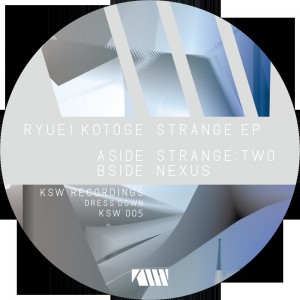 Talk about nice timing – I bought Osaka producer Ryuei Kotoge’s new album undo.redo today, and later saw that he released a new two-song EP through online dance imprint Kool Switch Works called Strange. Opening number “Strange: Two” recalls what has been the dominant sound the label has released in the past, juke, although Kotoge’s take on it isn’t quite as straightforward. The skittery beat pushes through, yet behind it is a cosmic swirl of synths, which eventually drop out in favor of a more hard-nosed drive. Back-end number “Nexus” is a bit more controlled – it thumps ahead while various spacey electronics are drizzled in the background, interrupted only by an authoritative vocal sample. Can’t say whether it matches up with his latest proper full-length (just opened it!), but it’s a good listen all its own. Hear it below or get it here.