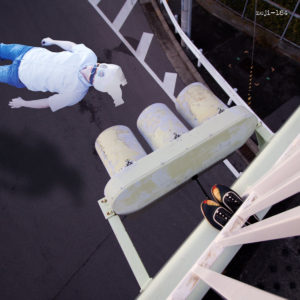 Well that’s a title I’m not going to try to put down again.

Osaka experimental outfit Satanicpornocultshop release new albums at a pretty rapid clip, but something about their first 2017 offering really leaves an impression. It is built primarily out of samples…a lot of samples, that is, criss-crossing and turning familiar songs into new mutations. This one grabs your attention right away with “Mobilesuit J.B.” which…well, takes a whirlwind of James Browns and creates somewhat of a space battle out of them. And from there, the group creates a disorienting set of songs featuring older rap and rock tunes diced up into frantic new forms. You could make a strong case this cut-and-paste approach is a nice reflection of the dizzying, media-saturated times we live in…but the group also have at least one outright political moment, on finale “The Wall” which…well, disembodied voices saying “America” and “the wall” sort of tell the story. Get it here, or listen below.